Well, Koty and I are finally back at Dancing Deer. We had a marvelous three week adventure to southeastern Montana and Yellowstone National Park and will have many stories and images to share with you in the days to come.

Normally, I try to get posts up as I go along but Internet access on this junket was spotty at best. In case you missed them here are a couple I did get to "Yellowstine-The Lamar Valley" and "Yellowstone-Mammoth Hot Springs" .

As much as we love the road it was wonderful to get home to the ranch. As we passed through the gate into the meadow I wondered why we ever leave. Even though we saw incredible beauty we saw nothing more beautiful than our home.

And just to put an exclamation point on that thinking Mother had this for us this morning.... 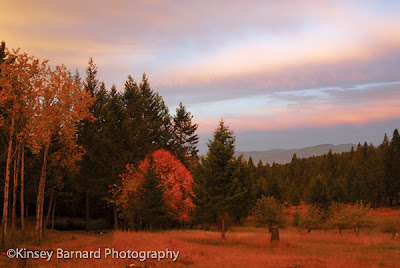 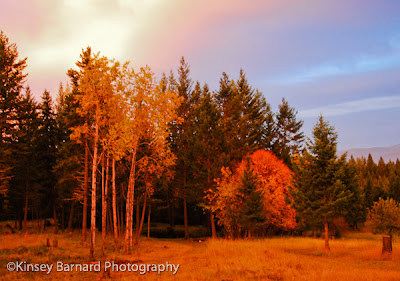 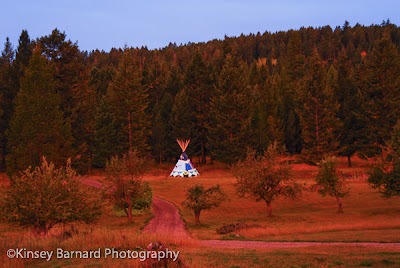 These images were taken before the sun cleared the ridge. The reflection of the sun on the clouds gave everything kind of a pink glow. As you can see, fall has arrived in technicolor.

I am still gimping around on the ankle I sprained in Bozeman, over two weeks ago now. I reckon I set myself back some by not letting it get enough rest. But, what can a person do? One has to get whilst the getting is good and it certainly was on this trip!


Every day that we breathe we know we are the luckiest pair on the planet.

©Kinsey Barnard Photography
Posted by Walker at 10:26 AM 3 comments:

If you hang a left, heading south from the North Entrance, at the Roosevelt Lodge you'll be on your way to the Lamar River Valley. Lamar is truly a breathtaking river valley.

The landscape was practically overrun with bison. I don't think I've ever seen so many in the park. 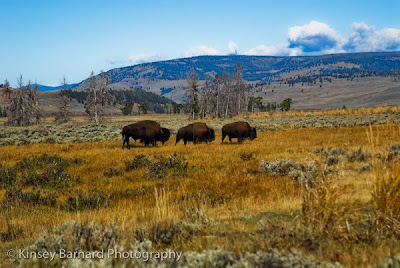 It's not so much that the bison are exotic wild animals it's more about a feeling, at least for me. When I see them out on the range I can't help but get all dewy-eyed, reflecting on days gone by. I know, I am a sap. 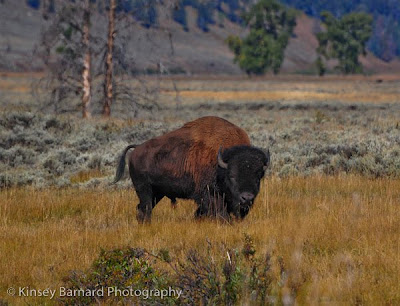 I think there were nearly as many fisherman on the Lamar River as there were bison on the range. The Lamar River is a beauty but I wasn't able to find a place where I could get any kind of a shot that I liked. I'm still struggling with that darned sprained ankle. It has really put a crimp in my style. The photo that follows is the best I could do. Maybe another time. 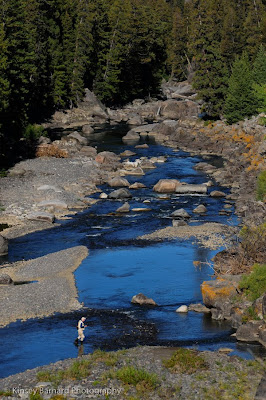 I stopped in at the Lamar Ranger Station because it looked kind of interesting, all old log cabins, barns and out buildings.


I pulled in and parked. There didn't seem to be a soul around but I heard some pounding going on in the barn. I have very old fashioned ideas about men. The one I found in this barn was one tall drink of cool water and he had the baritone voice to go with it. Turned out he was readying his equipment for a pack trip into the back country. At my age men are more of a nuisance than anything else but I must say, I would have ridden off with this one in a Minnesota minute. :)

This lucky devil is probably going to get to go! 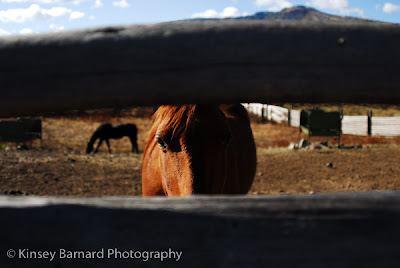 This last photo is of the barn again. I'm just throwing it in because I like the lines and tones of the image. 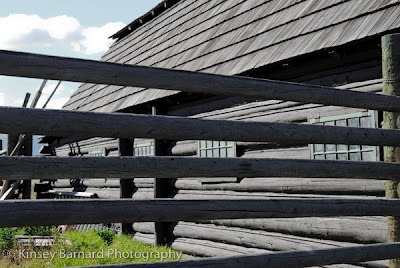 Speaking of images; I have been absolutely amazed at the number of people I see taking photos directly into the sun. The chances of getting a photo you'll want to look at shooting into the sun are slim and none. I realize it doesn't cost anything to trash a digital image but it sure makes for a lot of needless work. People, get that sun behind you! And then watch out your shadow isn't in the frame.

©Kinsey Barnard Photography
Posted by Walker at 9:29 AM 1 comment:

About five miles into the park, from the North Entrance, you come to Mammoth Hot Springs. It's a very busy congested area with lodge etc. But, just beyond you find yourself at Mammoth Hot Springs Terraces. The photos that follow were taken at the terraces. Some truly wonderous sights to see here. 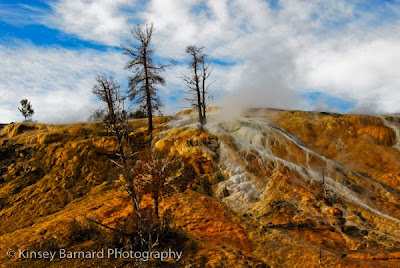 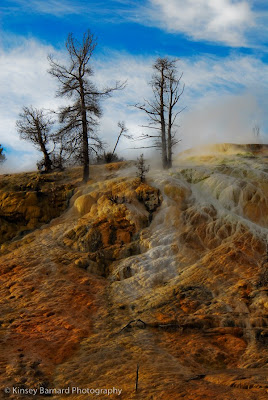 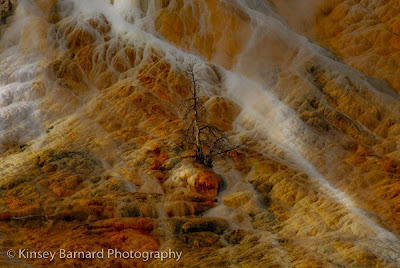 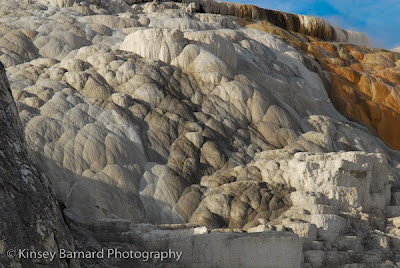 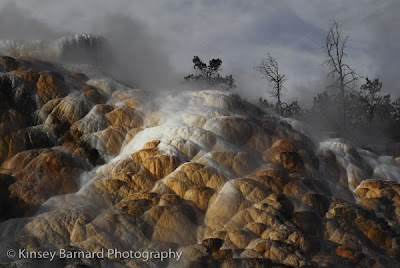 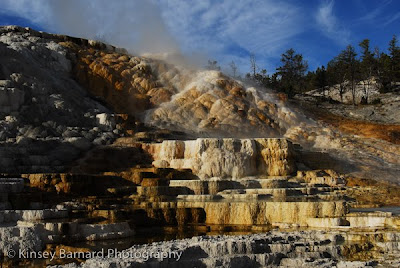 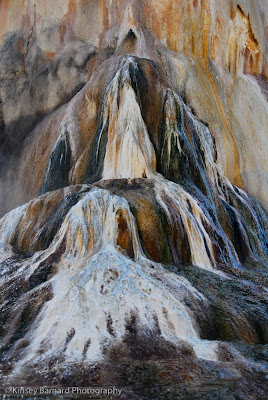 As many of my friends already know I sprained my ankle back in Bozeman on the Cottonwood Trail. What a bummer. But, have limped along all the way over to the north entrance to Yellowstone National Park at Gardiner, Montana.

Got in around noon and good thing I did too because everything around here is booked solid. Got one of the last RV sites at Rocky Mountain RV. We are at the end of the line at the back of the lot but we are grateful to have that!

Set ourselves up and headed out to the park. Didn't have a lot of time but I snagged a couple of images. It was an awesome afternoon/evening!

The rest of the images are just some random shots I took. 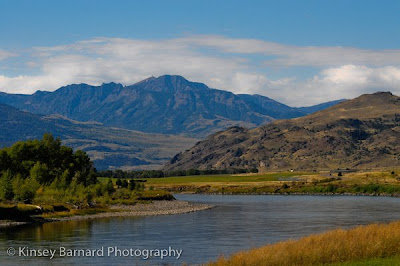 The above photo was actually taken on the road into Gardiner. What you see is the Gallatin Range and the Yellowstone River. It isn't called Paradise Valley for nothing! 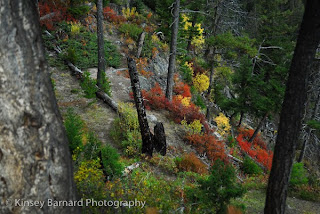 Fall colors are starting to show and they really paint the landscape. 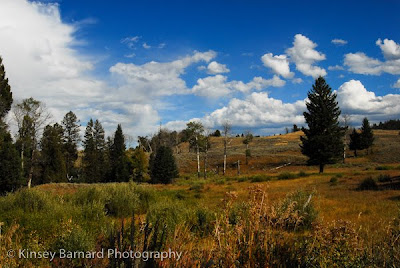 Clouds and sky were doing there thing! 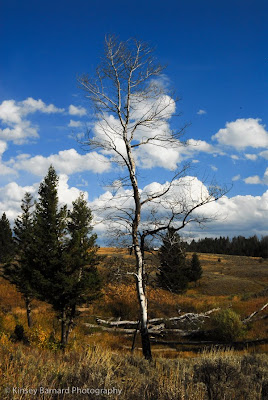 We just keep hobbling along hoping to find that next slice of heaven!

This post may seem a little off topic but it's not really. Life on the road, as a photographer, isn't always that glamorous.

At this very moment in time we are stuck in Bozeman, Montana in a thunder and lightening storm. Yesterday we tried to hike the Bear Canyon Trail, both Koty and I were drenched in mud and rain by the time we got back to Clem. I mean we were a mess. Clem was clean when we arrived. She isn't anymore. Despite my best efforts Koty brought the outside in! :)

So here we sit in Clementine waiting out the storm. I'm having some Cattle Drive Chili for lunch and it's damned good! Ok, and a little glass of Merlot just to ease the pain. :) 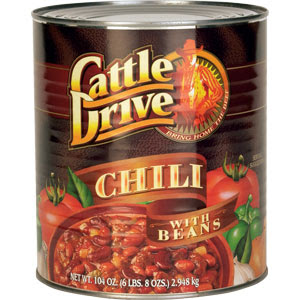 Eating out of a can isn't my favorite but I was compelled to pass along that this chili, IMO, is the best you can get in a can. I get mine at Costco.

I'm hoping this storm will pass as Bozeman has a Friday  evening "Art Walk" and I was looking forward to seeing the efforts of the local artists. The Weather Channel isn't too hopeful but they are wrong as much as they are right. We'll keep our fingers and paws crossed.

Not to overwhelm with skyscapes but the Fall sunsets have arrived a little early and I cannot resist them.

I know it isn't even Fall yet but the sunsets here at Dancing Deer are already just gorgeous. I don't know why they are so beautiful at this location. Although, I suspect it has something to do with the altitude and the position of the sun as it moves south.

Light is pretty extreme up here in northwestern Montana. Each year, at the extremes, we go from eight hours of darkness to just eight hours of sunlight. But the visual trip between these two extremes is always awesome. Hm, I wonder if I coulda used extreme any more times in two sentences. :) 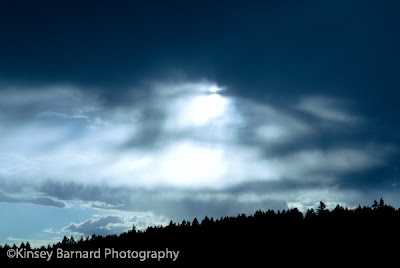 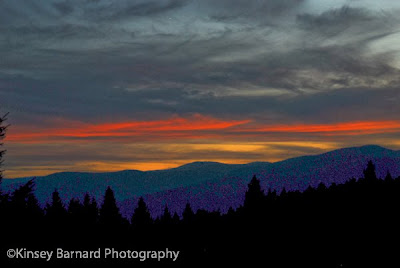 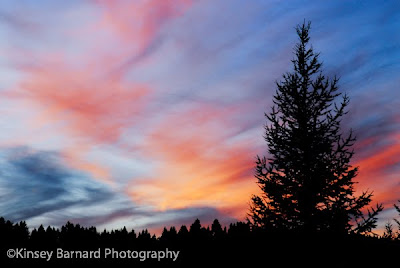 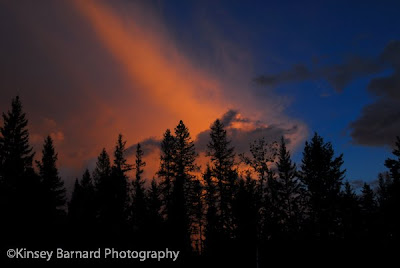 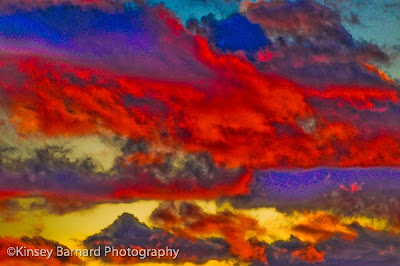 The scenery around here is so incredible I often think I am actually living in a painting.

©Kinsey Barnard Photography
Posted by Walker at 9:02 AM 2 comments:

We've been busier than one armed paper hangers here at the ranch. Trying to accomplish so many projects before the doing season is done. I haven't been able to go afield very much. This week it's a fencing project and that should just about finish me for the year.

The other morning I had to go down and open the gate for the fencers and when I came back up the hill I noticed something unusual which  hadn't noticed before. What I saw were the most beautiful skyscapes reflected in my windows. As anyone familiar with my work knows, I am nutz for reflections. 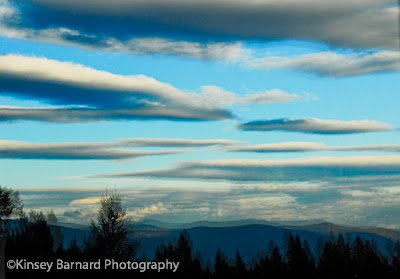 What I think is so cool is that these images look like multiple exposure photos. I think that effect comes from the dual panes. You can bet your sweet bippy one has the best insulated windows they can get living in this country.

The next image is of my bedroom window. 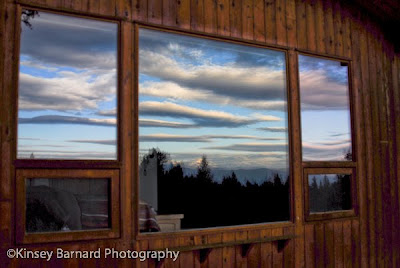 And, this next one is the livingroom. 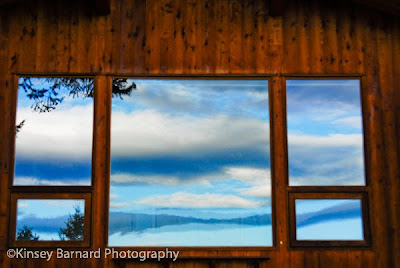 OK, so once again, I'm probably the only one who thinks these images are interesting but that's the great thing about this blogging stuff, you can do what ever the heck you want! Since I don't get paid for all the time and effort I put into this thing I might as well have a good time. And, believe me, I do! :)

©Kinsey Barnard Photography
Posted by Walker at 9:39 AM 4 comments: