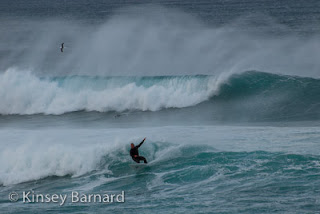 Surf's up in Monterey!

Mom took this photo at Marina Beach on Monterey Bay. There have been numerous storms through here since we arrived in the area and the waves have been amazing. Well at least to a Montanan! I think these guys are crazy to be out on those big, wild things in that freezing cold water. I like freezing cold but sure as heck not in the water!

I felt like running up to all of them and telling them they should head for Nicaragua! Mom's nephew, Lance Barnard Moss and his wife Kristin, run a first class surf camp there. And, it's warm and toasty! Serious surfers should check it out Surfari Charters. They also do fishing charters.

I would never have thought the waves could get so big in the bay. But, there they are!

© Kinsey Barnard
Posted by Walker at 8:29 AM