WHERE NOT TO PLACE YOUR BIRD FEEDER

A few days ago, I was suffering a little spring fever even though spring hasn't quite made it up to my elevation. Last year I placed a bird feeder on a beam on my deck because it was handy to get to to refill and still high enough that only birds could get to it. The problem with that, the birds whitewashed my deck. Something I didn't much care for.

I figured this year I should find new a place where I could still get to the feeder easily and the birds could feed and poop to their hearts delight. I came up with the idea of hanging it on the woodshed. Once hung it didn't seem as though the birds were not catching on to my new location very fast. I could detect no reduction in birdseed volume.

Yesterday I was over at the woodshed and to my immediate amazement there wasn't any birdseed in the feeder at all! I suspected at once I had been robbed. It was too early for the bears to be out snooping around so who was the culprit? I thought I had a pretty good idea who it was. Sure enough a little while later the bandit returned. And, I was able to catch her in the act. 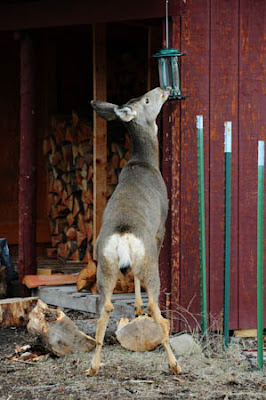 Notice how she is using the same log round I used to stand on to pound the nail. Shoulda moved that for sure!

Moral of the story: Deer delight in low hanging fruit.

©Kinsey Barnard
Posted by Walker at 9:11 AM

;-D your "caught in the act" photo is oozing with hillarity. i just thought that the blog wouldn't have been as hilarious without it hahhahha...