I Just Got a Brand New 2015 Jeep Grand Cherokee

Kinsey just bot me a 2015 Jeep Grand Cherokee Limited Edition 4x4. At least she keeps telling me she bot if for me. 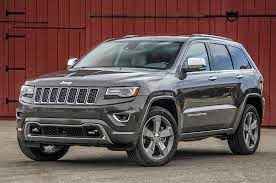 We've been driving a 2012 Ford Expedition 4x4. Kinsey didn't like the thing from the start. She bought it because her Explorer, which she adored, was a 1999. She thought maybe it was time to get more current technology for safety reasons. When she got to the Ford dealer she discovered, the years old, traditional style Explorer had been discontinued in 2010 and replaced by a crossover thing. Koty was still with her at the time and his crate would not begin to fit in the redesigned Explorer. After looking at other makes it appeared the entire auto industry had gone to the crossover mid size SUV. She looked for a used 2010 but couldn't find one. Apparently,  other Explorer lovers were reluctant to let go of the last "real" Explorer.

In the Explorer Koty's crate fit perfectly with the box facing forward just behind the passenger seat. It was an arrangement that made it like they were traveling together. But, Koty was getting too old to jump through the passenger side and the crate eventually had to be turned around to the back and a ramp placed on the bumper for him to walk up.

With little enthusiasm Kinsey settled on the Expedition. She never liked the car. It was so big it barely fit in the garage. It certainly wasn't handy to run errands in. But, worst of all, it was not the least bit sure footed on snow and ice. The truck was so heavy, even with studded snow tires, it easily lost traction.

Koty passed away in February of 2013. I arrived not long after. I didn't need as large a crate as Koty and I could clear a six foot fence if I put my mind to it but because of the way the back seats went down I still had to be way in the back looking out at where we'd been not where we were going. It was like being Siberia I can tell you.

Finally, I guess, Kinsey had had enough of the Expedition and started looking at what was out there. She narrowed it down to the Explorer and the Jeep Grand Cherokee. In the Explorer she felt like she was sitting in a hole. If she raised the seat her legs knocked into the steering column trying to get in and out. Jeep's down hill assist works on engine compression. The Explorer seemed to use the brakes. About the only thing the Explorer rated higher on, as far as Kinsey was concerned, was more cargo space.

So, Kinsey bought me the Jeep Cherokee Limited Edition and I'm just as happy about it as she is. She thinks, dollar for dollar, the Jeep is a better value. You can spend $60,000 plus on a Jeep but I doubt you get $20,000 worth more stuff. I think what you get is bragging rights. Thrifty Scot that Kinsey is she could give a fig about bragging rights.

This car has so many bells and whistles I have no doubt it's going to take Kinsey awhile to figure everything out. Right off the bat her biggest challenge is getting the Jeep started. She keeps looking for the ignition and there isn't any. It has the push button start and keyless entry. It takes a while to teach and old dog new tricks but I'm confident she'll get the hang of it, eventually.

Meanwhile, I'm styling up front with the wind in my hair from the sunroof! Thanks for buying me a new car Kinsey. I'm loving it.