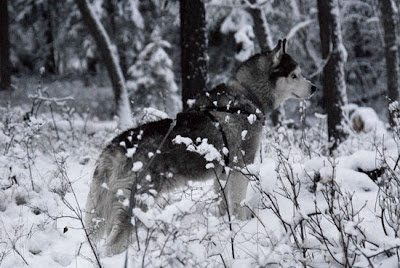 As regular readers know, Koty has been battling age and Cushing's disease for nearly two years now. Yesterday he decided he had had enough and headed for the Rainbow Bridge.

Koty came to me on December 1st 1999. He was just eight weeks old. He was the cutest fur ball you have ever seen. In the past thirteen years and four months we have been constant companions. Frick and Frack. Mutt and Jeff. I was Mutt he was Jeff.

Koty was an independent cuss from the get go and ready to go at the drop of a hat. We traveled together in our motorhome for months on end and no one ever had a better traveling companion. In his prime Lakota was as beautiful a Siberian Husky as you will ever see. Wherever we went people wanted to touch him and take his photograph. It was like traveling with a celebrity. Through it all Koty conducted himself with grace an elegance.

Two years ago Koty started losing the hair around his neck. The local vet tested him for thyroid mal- function, but the tests were negative. I started my own diagnostic search and concluded he had Cushing's. That diagnosis was confirmed with the appropriate testing. I'm not a big fan of pharmaceuticals so, with my vets blessing, we went the homeopathic route.

Throughout his life going was all Koty wanted to do. We could have hiked 24/7 and he would still have begged for more. We walked thousands of miles together. Lately, Koty had been slowing down which was not unusual considering the life span of a husky, without Cushing's, is 12 to 15 years.

For most of his life Koty had to be kept under control or he would take off for parts unknown. For the past several months he was allowed to roam. Age dictated he didn't go far.

I have a daily routine wherein I have my lunch, lie down on the couch to read and drop off for twenty to thirty minutes. I am usually rousted by Koty wanting to go for a walk. Even though he had the run of the ranch he wanted me to take him for a walk. Yesterday was no different. Off we went down the forest service road. He seemed to be a little more sluggish than usual and his breathing seemed a bit labored. Normally, he would turn himself around when he had had enough but not this day. He just wanted to keep going. I finally had to say no more we need to go home. About a quarter of a mile from our gate he step off the road into the deep snow and toppled over. He was gone in a matter of minutes. He died doing the thing he loved most in life.

Lakota Braveheart was Koty's father's name and he was his father's son.  A braver heart I have never known. Just know Lakota that you will live on in my heart until the day I too topple over in the deep snow.

Koty died the way he lived, with grace and elegance. There will be another dog but there will never be another Lakota Sunrise.

Some of my favorite photos of Lakota

©Kinsey Barnard
Posted by Walker at 6:47 AM

I feel enriched reading about Koty and your love for him. I am moved that he died in the deep snow. That feels very right. You were....are...two souls who will always be connected as one soul. This cannot be anything but a grieving time for you. I also know that he is and will continue to be with you.

I have had only one dog friend in my life, and as of yet have not been able to let another into my life, maybe one day. The dog friend I had was so close to me that he is still with me. He was closer to me than any human had ever been in my life. He was part dingo and knew every emotion I felt. He usually read my mind and knew what I would do or wanted/needed. He was exceedingly intelligent. I learned so much from him about myself, about nature, about life, about love.

I know that you understand this, as you had the most astounding friendship with Koty. All those miles of walking, companionship, understanding.

All I can say is, my heart goes out to you. And I am glad you shared this with me. You are a beautiful soul, and so is Koty.

Condolences to you, your heart must be breaking. I have that with our 2 dogs in the next couple of years.....I don't look forward to it.

Kinsey, I'm so sorry to hear that Koty has made his trip to the Rainbow Bridge. He was a great soul and I really enjoyed reading about your outings together. What a star going the way he did. Run free beautiful Koty and hugs to you x

So sorry about your loss, your story moved me and I surprised myself shedding some tears.... I've had a dear travel companion as well for more than 10 years, Shanti is her name, and I know this will happen soon as well. The fact that Lakota died doing what he loved the most, and chose where and when he was going to pass makes it feel right and beautiful. I wish you find a new companion soon and move to the next stage in your life without sorrow...

Kinsey, we now grieve together over our beloved family members. It is true there will never be another Lakota Sunrise or another Dolce Mia. Koty impacted your life as much as Dolce changed ours. We used to be those 'posh' vactioners. When we got Dolce, we knew we could never leave her behind. That is how we bought our fifth-wheel and then the motorhome so that we could vacation with her. I never hiked or camped until we had Dolce. Our business was even named after her just like yours is named for Koty.

To quote what you once wrote, "Encounters with good people are not to be taken for granted. I consider myself lucky to know them even if only for a little while." Thank you for being our friend and introducing us to Koty.

I am so sorry, Kinsey.
There is nothing that can soothe the loss of such a friend. My heart goes out to you.
Peace for Koty...
Hugs,
M

I am just reading this today. I feel bad and I feel like I new him through all your writings. A good friend of mine who traveled with me and convinced me to buying a second place in Montana also brought me to your column a long while back. She too, died. She was a big fan of your blog. Today I would have called her right away to see if she knew about Koty. I am so sorry for you. I, too, have lost several dogs in my life and the pain is the same with each one. It never gets better. I cry for you today.

I know your pain..Gods Grace

Oh, Kinsey, I am so sorry Koty needed to leave for higher ground. I just learned this after reading a lot of your Molly Montana blog and hoping he was still with you. Tears came to me as I felt grief for you and for him, but as others have said so well, he died absolutely the way he should have and with the person he loved most in the world. It can't get any better than that. My Buddy died in my arms suddenly from lymphoma of the liver and small intestine. He was my soul mate and I miss him so. --Susan in MD