Wild Horses of the Pryor Mountains

This summer I realized a dream of mine, to put a tepee down in my meadow. I am quite the romantic when it comes to things Native American. Having a tepee to see and spend time in was just too hard to resist. I finally gave in and purchased one this summer. What really got me inspired was my trip to Glacier and the Blackfeet Reservation. Chief Mountain, Blackfeet Drinkers of the Wind and of course the most romantic tale of all Running Eagle.

So, I ordered up a tepee from some fellows in Livingston. Part of the process was to work with an artist to design the artwork that would adorn the tepee. The artist turned out to be one Nick Knight who lives in the Pryor Mountains. We collaborated over the phone for a few weeks. During that time somehow the subject of the wild horses came up and before I knew it I had an invitation from Nick to visit these last vestiges of a wild and free West.

From the time I could get put on the back of a horse, until I was in my twenties, horses were my everything. I worked cattle on a neighbors ranch. I showed Western, barrel raced and competed in just about every timed speed event out there. But, life got in the way and horses were left behind,  not my love of them. I jumped at the chance to see the Pryor Mountain Horses. I arranged to combine my visit with Nick with my already planned visit to Yellowstone National Park.

I was to meet Nick in Bridger, Montana which is the nearest town to where he lives. Nick tells me that there is not only no stop light in Bridger but not a single one in the whole of Carbon County! I left Gardiner for Bridger bright and early. I had been told how beautiful the Beartooth Scenic Highway is so I took that. I've a whole blog post planned for that little junket. Let me just say here I won't be taking Clementine and Shadow over that route again anytime soon.

By the time I got to Bridger and the city campground it was getting on in the afternoon. I was beat. I only had time to hook up Clementine, batten down her hatches and throw some clothes into a duffel bag before Nick showed up to take Koty and I out to his ranch. The ranch was some thirty miles distance over some pretty nasty roads. Shadow would not have been able to make it to his ranch let alone out the the horse range.

In the past Nick has been host to Ginger Kathrens. Ginger probably has spent more time with these horses than anyone else on the planet. Over the years she has given Nick copies of her books and videos and that night I watched a couple of the films. I was captivated. Wild horses have social mores entirely different than domestic horses. I highly recommend these videos.

Bright and early the next morning we set off for the range.There are a couple of ways to approach the range. We came in from the north, the Montana side, because the horses are on the high plateaus until winter conditions drive them down off to the south toward Lovell, Wyoming. I can't say what the roads are like down there but you don't want to be driving a street car if you approach from the north.

Nick tells me people try it all the time and end up having to pay a heavy toll to get unstuck.


Of course one of the things about this plateau is that it makes a dramatic landscape in which to see the horses. It's like they are running free on top of the world.


I'm going to tell you can find photos of these elegant creatures that are far better than the ones I am about to show you. I have to be honest. I was so excited to see these wild horses thinking about photographing them was a nuisance. Except for Nick who was back in the truck I was there with them all alone. It was a truly spiritual experience. 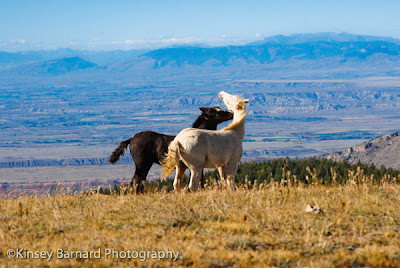 In the above photo a couple of young studs play with one another with Wyoming off in the distance. 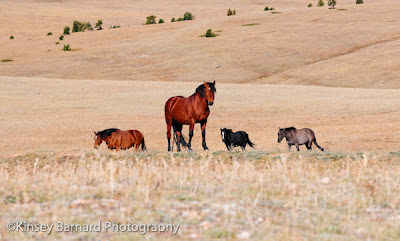 The bay stud in this photo was one of my favorites because he so clearly showed his Spanish heritage. I've see wild horses in the Nevada desert and they were kind of a scraggly lot. But, these Pryor horses they are gorgeous. 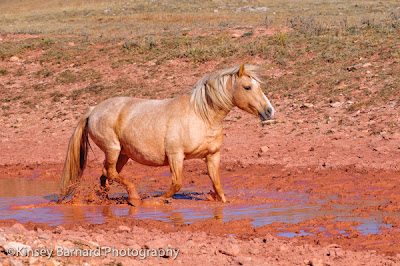 Here a palomino mare is getting run off by the big bay and his family. I don't know what relation this mare is to Cloud but undoubtedly she is related. Cloud is the horse Kathrens named and developed the Cloud Foundation in his honor. I was hoping to see Cloud but it was not to be. 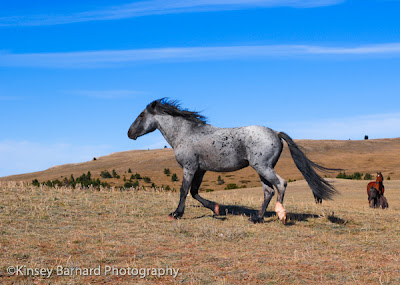 This fella had a bit of a jug head but you can see what good shape he is in. It has no doubt helped that greater than usual summer rains have kept the grass growing. 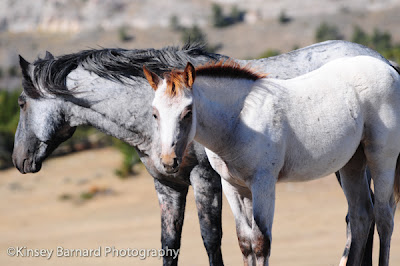 One of this years foals. 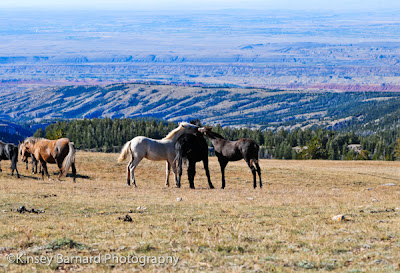 Another shot with that fabulous, other world background.

We drove around to various place where the horses are known to hang out but we only saw these two families. All in all I would guess we saw maybe twenty five or thirty horses. The total on the range is around 125. But, it was an incredible experience for someone who has horses in their blood. Even though I haven't had horses of my own for many years that bond never leaves you.

I've come to look at this trip as kind of a recon junket. I have been invited to return next July when the wildflowers are in bloom and the thought of it has my photographer genes racing. So, if the gods are willing I will return next July and apply myself to the job of images. Can't you just see wild horses, manes and tails flying, as they run through fields of flowers? I'm there!

Hey Kinsey, I just love Ginger's books and videos, and was really tickeled to see your photos! I sure hope you make it back in the spring and look forward to some of your awesome pictures :-)
Sue