ROUND HOLES AND SQUARE PEGS

A few nights ago, to the horror of professional dog trainers I’m sure, I aborted the crate training exercise of making Molly stay in the crate overnight. It had been almost three weeks and still Molly was screaming her head off and thrashing around in the crate. I did everything by the book. I left her to scream.

Then a few nights ago I woke to her screaming. It was so clear to me that these screams were not those of a spoiled puppy but the primal screams of an incredibly distressed being. I thought I had heard this distress before but people I thought should know kept telling me I was doing the right thing by making her stay in the crate and letting her whine. As I rose from the bed I said to myself “That’s it. We’re going to find another way. Screw the so called experts.”

When I entered the room I was bowled over by the fecal smell. I thought “Oh no! She’s pooped the crate again.” That would make it the third time in 19 nights. When I let her out there was no fecal matter present. We hurried outside and the little girl let fly. She had worked herself into such a frenzy she had given herself diarrhea and somehow held it. What I smelled was her gas.

I created a little corral beside my bed by blocking it off at the end of the bed and the wall. Molly slept there the rest of the night without making a peep. It was the best night’s rest either of us had had.

Molly is sleeping in her corral. I am sleeping in my bed. Molly gets up, moves around and paws the barrier if she needs to go out. No more whining. No more screaming. She seems happier and more trusting all the way round. I know I am. Also, worthy of note, she hasn’t had an accident in the house since she started sleeping with me outside the crate.

I have always thought of myself as a square peg in a round hole world. My thought process and method of learning has always been very different from most people’s. Because of this I thought I was useless and stupid. I couldn’t get anything. I was a misfit. In high school I was suicidal because of it. It probably didn’t help that my father constantly referred to me as a “dumb bastard.” It turned out that I had an IQ of 149. No genius but certainly not stupid. My mind and reasoning is just different from most people. Unfortunately, ours is a society that is only comfortable with conformity.

It seems to me things are not much different for dogs. The so-called experts say this is the way it’s done and you’ll ruin your dog if you don’t follow the “rules.” I think you have to take professional trainer advice with a grain of salt and do your own thinking. Just like people, all dogs are not round pegs. I think this is especially true of the more intelligent breeds. Australian Shepards are one such breed.

Molly and I will just muddle along, two square pegs together. We are a perfect fit. 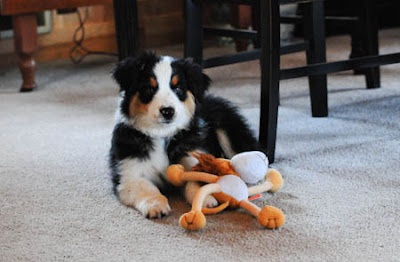