Well, this day did not turn out in any way shape or form like I planned. God must have been rolling in the grass. (see Making God Laugh)

Clem's batteries went dead again. I got up at 1:30 am to check and the refrigerator indicator lights were out. Apparently, the frig uses some electricity even when its switch to gas. I started the engine and boom right back to full charge. My guess is that this is going to sort itself out.

The "plan" was to move down to Seeley Lake. A very short distance but I had heard and read how nice Seeley Lake was. This drive along 83 is know as the Chain of Lakes and there are a bunch of them. I stopped in at every one and saw nothing I was interested in photographing. About half way to Seeley I spied the Clearwater Canoe Trail. Both Koty and I were anxious for a morning walk.

The trail is about 1.5 miles one way. Just a nice morning walk along the Clearwater River which snakes through the marsh. 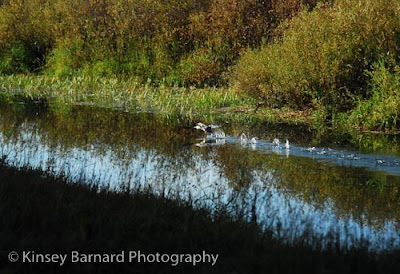 Ducks Take Flight on the Clearwater

We scared up these ducks. They were the only wildlife that we saw. There was bear scat about but not much and not very fresh. 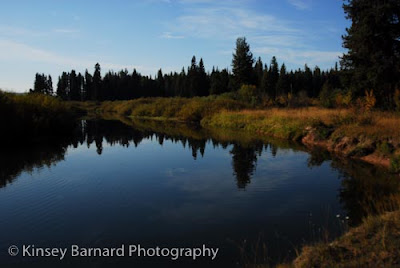 I don't know how far the Canoe Trail goes but it looked to me like, if you were a canoe or kayak user, it would be a very cool place to explore.

From the Canoe Trail we traveled on down to Seeley Lake. I found Seeley is a lake with many private homes around it. Not the kind of scenery I look for in my travels. So, we passed right on through. To my eye, the prettiest lake of them all was Salmon which is right on the road a few miles south of Seeley. I thought I stopped and took a few photos of it but I don't seem to find them. In fact I think I've had a FUBAR happening because a number of photographs seem to be missing. Oh, well, they weren't anything to get excited about anyway. The sky was smokey and murky.

I had planned on staying at Aspen Grove but there was a control burn going on and it would have been a waste of time not to mention unpleasant. It was also the only reason I had come this way. I decided to go on the Great Falls. I've never been there before so what the heck. My Rand McNalley map indicated it was scenic. I'd argue the point with them. For those interested this would be MT 200 to Great Falls. For a good part of the way the road runs along the Blackfoot River. 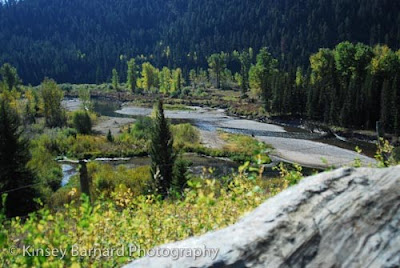 It was one long frapping day with not much to show for it. Staying at Dick's RV. Noisier than all get out from traffic. This ain't no Holland Lake!

©Kinsey Barnard Photography
Posted by Walker at 9:09 AM