Last night was anything but peaceful. I even tried stuffing my ears with Kleenex to stifle the noise. Half this park is taken up with full timers. How people can live in an RV in this climate with that noise is beyond me. I count my blessings.

First thing we headed over to Gibson Park for a nice early morning walk along the Missouri River. Not very picturesque.Lots of industrial sites along barren shores. 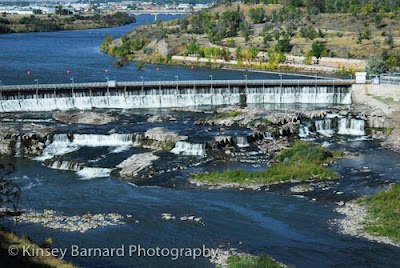 Not to insult the folks in Great Falls but I think the Kootenai Falls, in my neck of the woods are much more spectacular and this photo only shows a small portion of them.

One of the things that is endlessly fascinating, and lovable, about Montana is how few people live in the state. Land mass wise it is the fourth largest state but still has less than a million people in the whole place. Great Falls is the third largest City and it has less than 60,000 population. Here's a list of the Biggest Cities in Montana.

The biggest cities here look much like the town I grew up in in California in the fifties. I recently was surprised to read in my Electric Co-operative Magazine that many rural areas in Montana did not get electricity until the late fifties and early sixties. I suppose this is another reason I like being here. I really can recapture my youth. 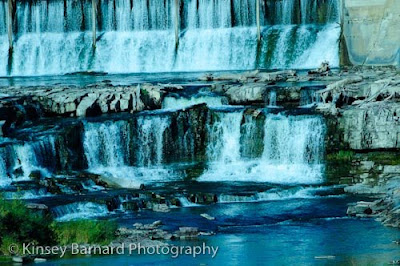 A Different View of the Black Eagle Falls

I did see some great white birds on the river that I have yet to identify. They looked like white pelicans and they were often surround by sea gulls. 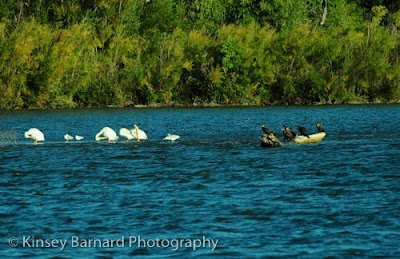 White Pelicans on the Missouri?

Clementine continues to fulfill her role as a traveling billboard. But, I'm afraid I didn't exercise good judgment when I decided to go with a photo of Koty. People are always asking if I am a husky breeder. Still, it does get peoples attention and makes them curious so all is not lost. 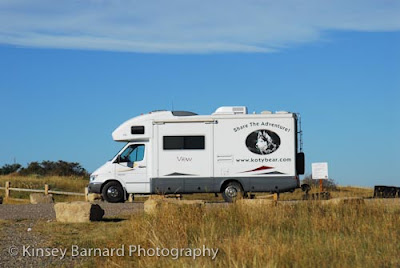 After getting our fill of the falls we headed down I-15 along the Missouri River. I've never seen the Missouri before and it really is a beautiful river. 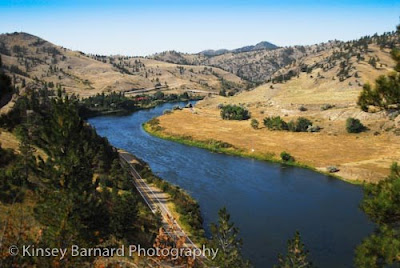 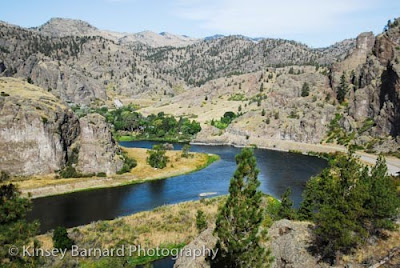 I am a very big fan of color and contrast and the Missouri presents it in spades. The beautiful blue water against the golden hills. It's quite awesome to my eye.

We headed on down to 287 as our way to Yellowstone. I'm finding it a little daunting at times having to do the planning, driving, navigating, camping and photography all myself. I'm feeling like this trip is a scouting trip. Identifying places to return to to really get into it.

I had thought we might stop at Canyon Ferry Lake but when we got there I didn't see anything that interested me so we finally ended up in Ennis. We found a nice new RV park, Continental Divide RV, and spent a very peaceful night!

©Kinsey Barnard
Posted by Walker at 9:15 AM