The first brilliant thing I did this morning was overload the dealers circuit and blew the breaker. Completely forgot I was on 110.

Obviously, I didn't have an appointment and the guesstimate was that they would not be able to Clem until the afternoon. I would have liked to walk around old town Livinsgton ad taken some shots but it was too rainy.

We just hung out in Clem working in Lightroom and reading. At around four o'clock we got the knock. Once she got in to see the doctor it didn't take long to get the diagnosis and repair. It turned out a part which they called a "turbo muffler" had split and caused the problem. The whole thing took less than an hour and cost me nothing. The 110 mile and the repairs were under Chrysler's warranty.

The thing that really frosted me was I was told that they had never seen a more filthy air filter. How could that be? I just had had Clem serviced at Kari Dodge in Kalispell. Admittedly, it was a bad experience see (Day One). It seems the tech at Kari had never even looked at the air filter. He was too busy charging me to "remove the tires" to check the air pressure. I strongly advise you avoid Kari Dodge like the plague if you are ever in need of auto service in Kalispell. I know I will never grace their door again.

But, Yellowstone Country, that's an entirely different story. It's been a very long time since I have been treated as well. These people know the meaning of the word service. From the time I was welcomed by Jeremiah, the evening the tow truck dropped me, to my farewell I was treated like long lost family. People could not have been more courteous or helpful.

Dave, the service manager kept me updated on how things were looking. I don't mind waiting my turn if people will just let me know where things stand. These guys believe in communicating and I really appreciated it. My only regret is that they are so far away. If they weren't I would never take Clementine anywhere else.

I didn't get to interact much with Mark who was the technician but I have every confidence Clem could not have been in better hands. 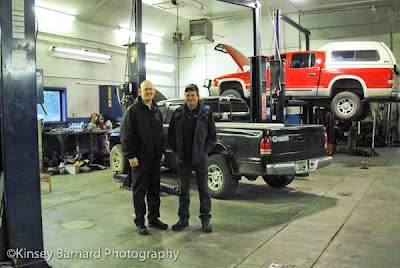 I wish I had gotten a picture of Clem in the shop but I am worthless as you know whats on a boar when it come to photographing anything other than nature. I just never think of it.

If you ever find yourself near Livingston, Montana with car trouble this is the place you want to go Yellowstone Country Chrysler- Ford

©Kinsey Barnard
Posted by Walker at 10:18 AM