We continued our journey toward West Yellowstone following 287 and the Madison River. The Madison is a also a very pretty river and it was loaded with fishermen.

I made one stop along the way at the "Beaver Ponds". Didn't see any beavers but I thought I saw some beauty there. 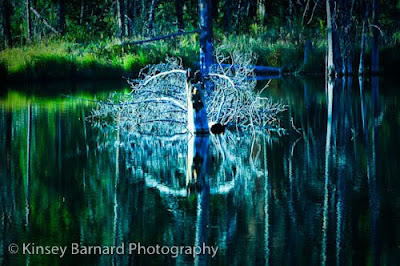 The park seemed pretty crowded and I soon found out why, the road to the North Entrance was closed due to construction. We headed directly to the Madison Campground. It had plenty of spaces available.

After checking into the campground I thought I had a very clever idea. I would drive up the closed road a way and then give Koty a good walk on a road that was not likely to have much traffic.

I was really thinking we could walk a long way with some privacy. Well, there weren't too many cars but about a mile and a half up the road had a barrier and said to walking in either. Drat! 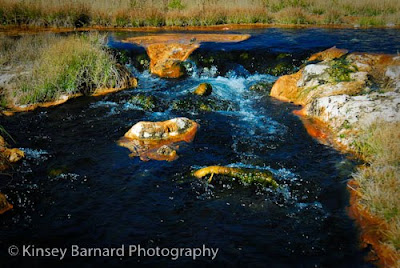 On the way Koty had his first run in with a hot spring. He jump off the road to get a drink and had a very sudden surprise. We did see a lonely bull buffalo grazing along the Gibbon River. Not a photograph kind of thing.

So, the I thought "Ok, we'll go down to West Thumb and then up". Our first stop was Black Sand Basin where we found this somewhat colorful pool. 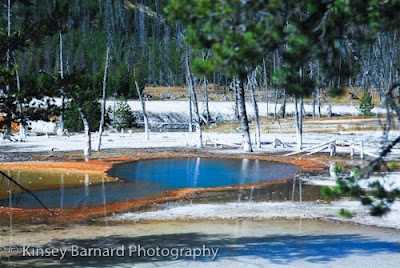 By the time we got down to the West Thumb turn-off there was a great big fire raging and the road was closed. At this point about two-thirds of the park was out of bounds. Foiled again. 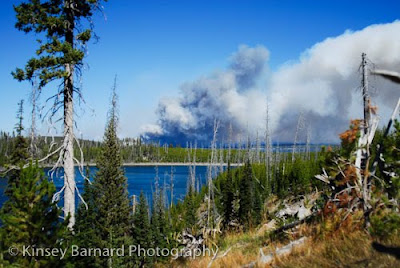 So, back north we headed. We took a side trip on Fire Hole Lake drive. It turned out to be pretty cool. 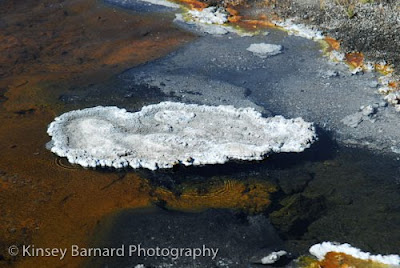 There were a number of colorful pools and I could see that there might be some very nice opportunities with morning light. I made a note for a reprise. 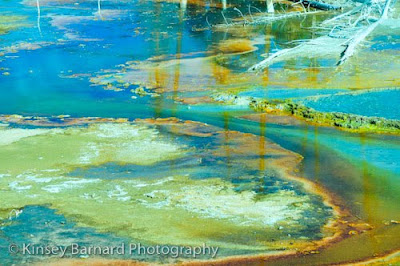 Unfortunately, you may not be able to see the mystery in the photo below but there was like a glow that came up from this pool that look surreal. It kinda looked like maybe it was a mystical portal. 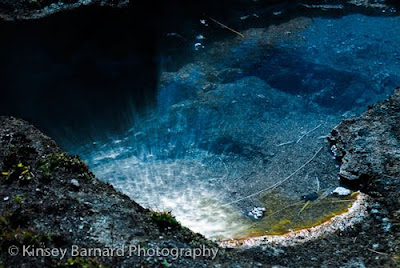 I never get to be in a picture so I could resist taking one. I've tried to get Koty to do it but he refuses. 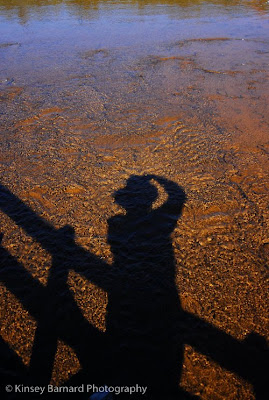 We also stopped in at Fire Hole Falls where I took a series of perfectly ordinary and boring pictures.

We capped off the day with another trip up the closed road to Norris. I thought maybe in the setting sun the old bull might present an image there along the Gibbon. He was still there only lying down. I walked all around him. Called him any number of names. And do you think the old sod would get up? Not on your life. He had heard it all before.

I did find this little gem. Well, I think it's a gem. Beauty is, after all, in the eye of the beholder. 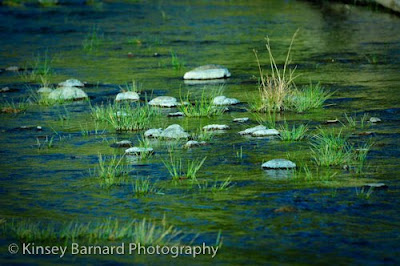 Islands in the Stream

It has been a very long day and I'm ready for the campground. The spaces are just little turn outs and ours was full of ashes. Koty is now, very happily, a grey and black dog.
Posted by Walker at 11:00 AM