A wee bit nippy this morning, 27. It was a cloudless night and the moon lit everything up like daytime. I tried to spy those pesky bears in the apple trees but they weren’t about.

This was a scheduled working in the woods day. I started burning some of my slash piles and cut up another couple of trees. Some of the fun is gone out of my forest job as it has now gone from a beautification to a salvage job. 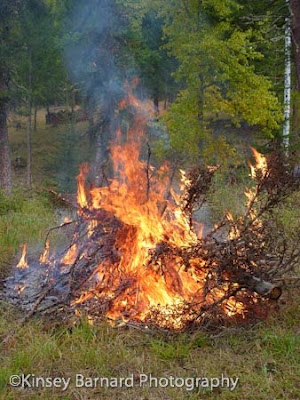 When I first moved here, seven years ago, I had a long time logger do some logging for me and he also built a pond. He was kind of a curmudgeon and clearly disdainful of tinhorns such as myself. He told me what I should do was clear-cut the whole piece. I thought at the time he was just trying to get my goat. But, now, I’m not so sure. I wonder if he already new what was going on with the health of the forest. I suspect this is all part of a natural cleansing operation. The populations of anything get to crowded they grow weak and vulnerable. Nature has Her way of culling the crop. I suspect it will happen to us one day. 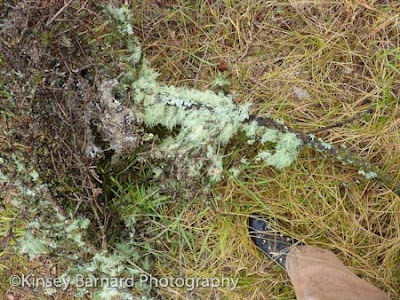 I don't know if this lichen is the cause or the effect. The effect I think. You can tell which trees are on their way by the level of lichen as it creeps up the trees.

Gold closed at another historic high today around $1,055. I should be delighted about this as I invested in gold companies many years ago. I’m not in the least bit happy about it. This high gold price is not saying anything good about what is in store for us.

Last night, around 9:00 pm, the wind kicked up again. I used to think how lucky I was that the wind seldom blew up here. These days it seems like it blows all the time. As I relaxed in my recliner I could see sparks flying from one of the slash piles.

I have a very healthy respect for fire (the word fear would work as well). So even though the fires were burned down to ash piles I was compelled to investigate up close. I donned my cold gear and with flashlight in hand I set off into the night. I was kind of hoping the bears weren’t out. If they were they didn’t advertise.

As I trudged through the dark it started snow and that was a relief. I looked over both piles and satisfied myself they would be ok to leave on their own.

I’m pooped tonight. I did hard labor for over four hours and that’s quite enough for this old broad.

# The original title of Jane Austen's novel Pride and Prejudice was First Impressions.

# Most automobile trips in the US are under 5 miles.

# The high roofs of London taxicabs were originally designed to keep gentlemen from knocking off their top hats as they entered and left the vehicles.