Woke up at the crack of dawn. Clem's auxiliary batteries completely drained. I was worried that the batteries might not hold a charge. I haven't done much dry camping for awhile and I wondered if the batteries might be effected by not being used. I guess I got my answer. The strange thing is I started Clem's engine and the battery gauge went back to full almost instantly. Hmmmm?

I got geared up and we headed for the falls. About half way Koty refused to go any further. This happens every once in awhile and I really have no idea why. But, what ever the reason he did not want to go up that trail. I really wasn't that inspired by those falls or I would have taken him back to the rig and gone without him. 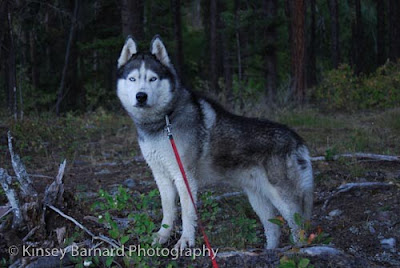 So, I decided to work along the shore and see what I could come up with. Even though it was another cloudless day it was still quite beautiful. But, it makes it more difficult to create a photograph that is appealing to the eye. 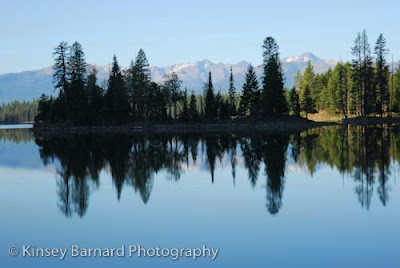 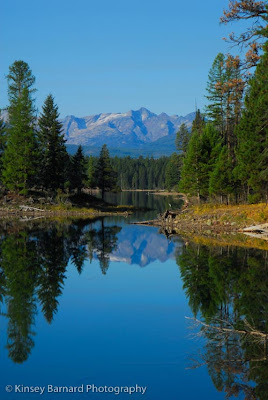 The mountains that you see in the distance are the Mission Mountains. I hope to be seeing them again from the other side before our trip is over. 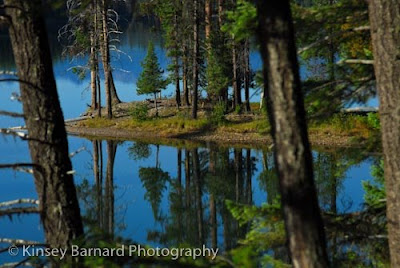 Holland Lake-3 is my favorite of the series. For me there is an elegant kind of chaos that is, in my opinion, the essence of nature.

It's amazing how much time I can grind up plotting photos. Before I knew it it was time to head for camp. On the way back we ran into a couple form Wisconsin, Alan Pape and his wife Marilyn. Alan is a painter and like me they were wandering the woods in search of certain beauty. You can find Alan Pape here. You meet the nicest people out in the woods! Sometimes not but mostly so.

As they headed up to the falls I hoped that Koty was not reluctant to travel the trail because of perceived danger.

After lunch we headed over toward Owl Pack Station. This is outfitter staging area for taking folks in the the Bob Marshall Wilderness. Around here it's referred to as simply "the Bob". It is one of the last great wildernesses left in America. And, when people say "the Bob" they always seem to have a tone of awe in their voices.

We hiked up the trail a couple of miles. Didn't find anything to photograph but it was a beautiful trail in the forest. And, it was cool. Temps have been in the eighties here. Way to hot for me and the bear.

On our way back to the campground we ran into a couple of kayakers just about to set sail. Being the shy unfriendly type I walked right over and said howdy. It turned out to be a young woman and an elderly gentleman. The young woman was taking her friend Bob on his first ever kayak trip in celebration of his birthday. Bob was 89. I gave them card and said I would be happy to send them a photo. 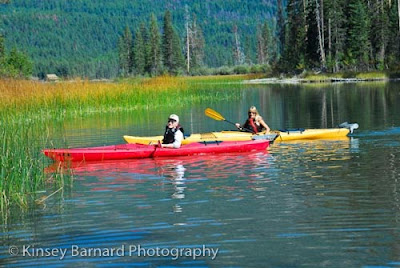 By the time we got back to camp the sun was setting. Last night I had seen a reflection on the water cast by a cabin at the Lodge near by. I wanted to set up and see if I could get something. This is what I got. 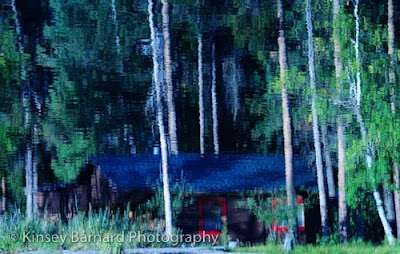 Not as interesting as I thought it might be but still quite nice I think. I also spied these canoes on the shore and gave them a shot as well. 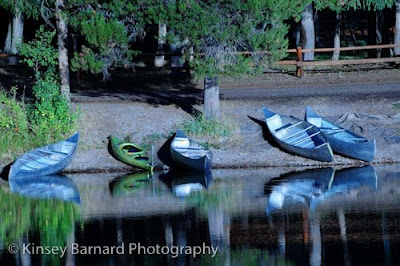 Tonight I am going to use no lights and read by flashlight and see what happens.

©Kinsey Barnard Photography
Posted by Walker at 11:00 AM