The best thing that happened this week was I finally got my D200 back. I had sent it to El Segundo for cleaning the first week of July. Turn around time on this sort of thing is usually about three weeks. It took ten. Murphy was hard at work and everything that could go wrong did.

I shoot both the Nikon D200 and the D300. As the number would suggest the D300 is newer and faster in every respect and has more bells and whistles. But, I love my D200 best. I don't know why but my landscapes with this camera are always a cut above. I've felt adrift without it.

I also got my 2101 WILD & WONDERFUL WAVES calendar finished. Looks pretty darned good if I do say so myself! :) 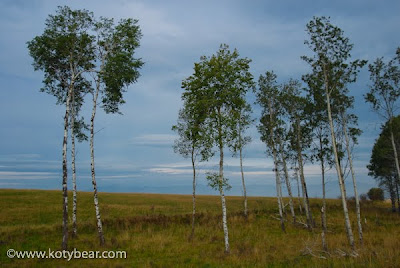 I could hardly wait to get out in the field and give her a spin. Luckily, I never have to go far to find beauty around here. This aspen stand is just down the road from my place. 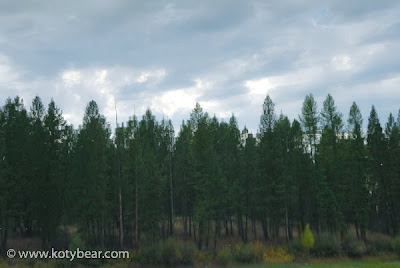 One of my favorite things to photograph are reflections so I headed on up to Kikomun Provincial Park in British Columbia. Kikomun in a favorite and is only twenty-five miles from home. Kikomun has several lakes and is situated on the Kootenai River or the head of Koocanusa Lake. I'm not sure which. Need to look that up on a map. The above is entirely reflection. 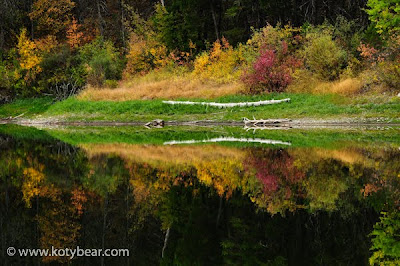 We were able to get to Hidden and Surveyor lakes before getting rained out. Actually the cloudy weather makes for very nice reflections. 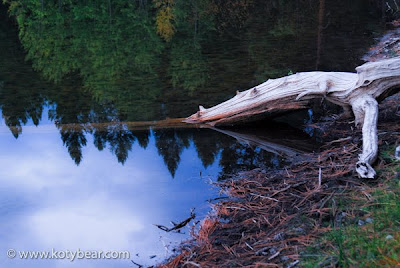 There are hiking trails around both these lakes that make for getting around and getting better shots. 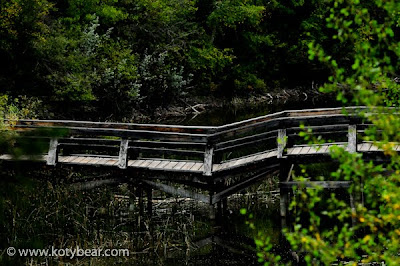 There is a very cute bridge that spans a little neck in Surveyor Lake. I always lkie to photograph it and it always turns out different. Here's an image I got on another fall occasion. I really enjoy looking at how different images are from one time to another. SURVEYOR BRIDGE 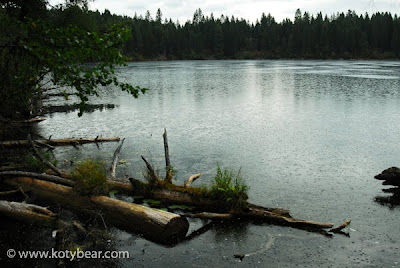 I don't know if you can see them but the surface of the water in the above is covered with rain. This was the last photo I got before heading for shelter. The rain was coming down pretty hard. 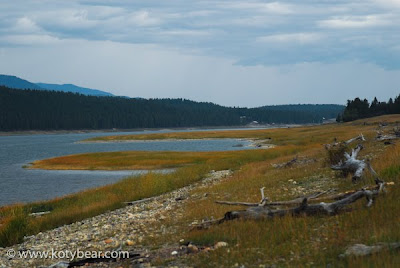 Before heading for the barn we went over to the river. While we were sitting there I could hear the call of a loon. There is nothing so lovely as the call of the loon in my book. It was all I could do to keep from weeping with gratitude as realized, this is my life!

This week I worked on putting together my 2010 calendars. I have four planned and I managed to get three put together. The fourth I hope to get done next week and it will be on the pacific coast. The the photo are some of my favorites of the subject. The calendars sell for $24.89 each and are top quality.

This week was my car trouble week. I hope I got that over with. First the ABS light came on in the Explorer and then Shadow got a nail in one of her shoes. I drove too far on it and ended up having to buy two new tires. Drat!

Whilst waiting for repairs Koty and I took a walk along the Tobacco River which runs nearly through town. I understand at one time it did. I couldn't resist this clever prop of a fishing pole with a fish on the line. I couldn't get the pole in. I think it's for the upcoming Salmon Fest. 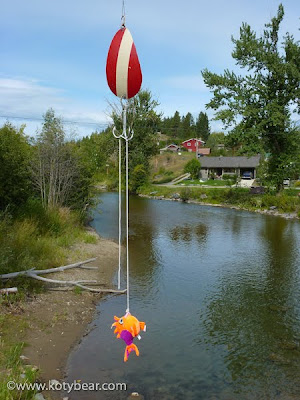 It is quite apparent Fall is on its way. The last of the flowers are on their way out. 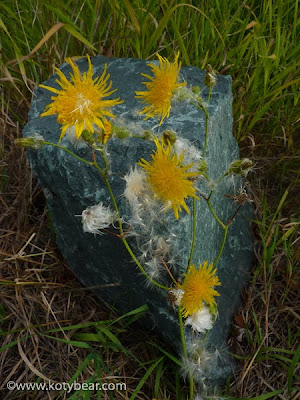 LAST OF THE FLOWERS

For our outting this week I was going to go see what photo ops we might find at Frank Lake but I got waylaid by a sign that said Rock Lake. I hadn't ever been to Rock Lake so I decided to give it a whirl. Turns out there are three lakes up this particular road. Long, Rock and Timber.

The first lake we checked out was Rock. It apparently got its name because it has a few rocks in it. 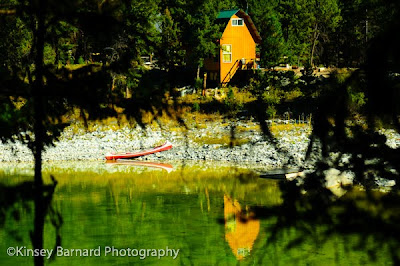 A few lucky folks have places on this lake. I reckon they are only summer places as you'd have a devil of a time getting in here in the winter. Sadly, people had music blaring and it kind of took the bloom off my lily.

On the public side of the lake it is pretty heavily forested and difficult to get a good view. In my never ending quest to get a nice image I decided to take off down a slope through a tangled mass of blow down. Koty was leading the way as usual on his leash attached to my belt. The forest was so thick it was pretty dark and I had my dark glasses on. I couldn't take them off or I really wouldn't be able to see. Normally, I wear Transitions but that's another story.

It wasn't long before I lost my balance and went crashing. I always seem to put my hands out to break my falls, which are frequent. I call them my bone density tests. If I had brittle bones I surely would have broken something by now. Anyway, this time, I fell on something that punctured the palm of my hand. I don't know what it was cause I I pulled the thing out so fast and tossed it I never got a good look at it. What I did see was my stuffing popping out of the hole. Not pretty. Below is the image I got for my trouble. 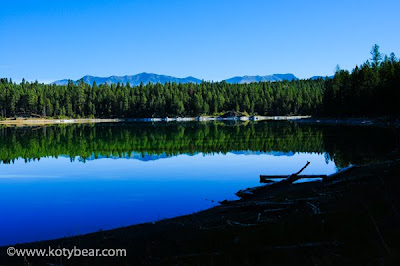 A little further down the trail we found Timber Lake. This lake was named for the old timber standing in and around it. Folks around here were very original when they named these lakes. 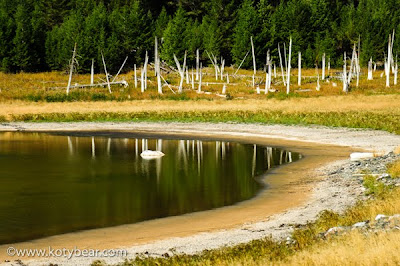 The lake was fairly low but I'll bet it's pretty in the spring. We'll have to come back and see next spring. You can't see it in the photo below but there was a whitetail doe and her fawn scampering around behind this rock up near the timber line. I was so very beautiful to watch. 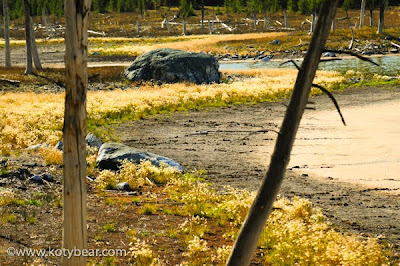 I noted a few of these bird boxes at two of the lakes. I don't know what they are for. The boxes are large as are the entry holes. I was thinking maybe owls but I don't really know. 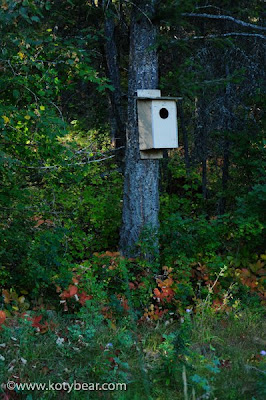 We never did make it to Frank Lake. It was smack dab in the middle of the day by the time we finished with the others. Soon it won't matter because the angle of the sun will be coming from so far south any time of day is interesting. We'll have to save Frank for another trek.

We did get more beautiful sunsets this week. 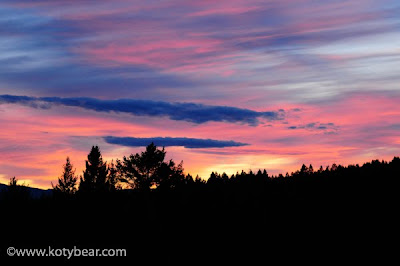 ©KINSEY BARNARD
Posted by Walker at 7:47 AM No comments:

I got a call from Montana Woodworks saying my stool was ready. I have, for sometime wanted to try and get some shots of the Koocanusa from the west bank. I figured I might as well kill two birds with one stone. It never ceases to amaze me that after seven years I still find trails I have not been down before. This day I found a new one that was just the ticket. Below is a photo of the bridge that spans the lake to the West Kootenai. 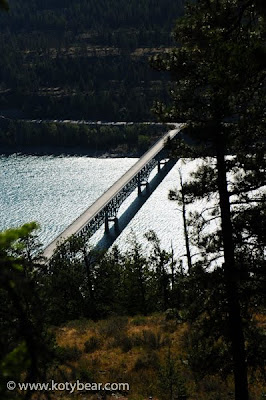 The day was not good for photography. It was very hazy. Most likely due to a fire somewhere. Although, as fire seasons go this year was a very light one. The important thing is I found a promising place to return to when conditions are more favorable. 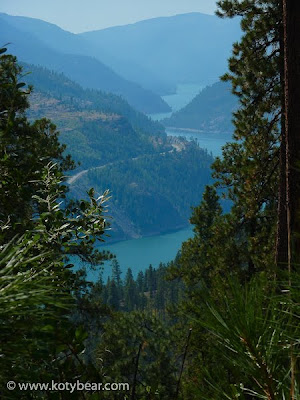 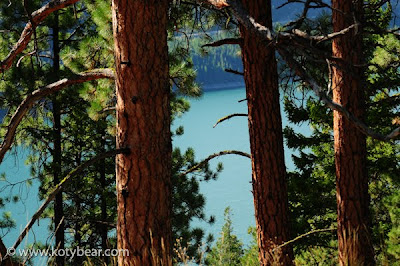 KOOCANUSA THROUGH THE PONDEROSA

You can see that the leaves have already begun to change. It never ceases to amaze me how fast the sun moves north and south here in north Montana. We've already lost well over an hour of sunlight. I don't know why it is but I always seem to get the best shots of Lakota in the Fall. 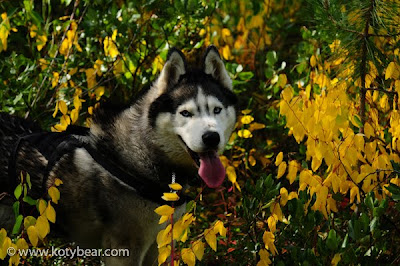 Fall always seems to bring with it the best sunsets of the year and they have started already. Pleas note there has been no color enhancement of these photographs. This is the true color. 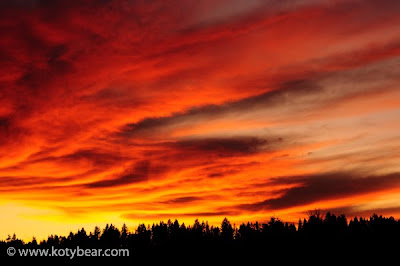 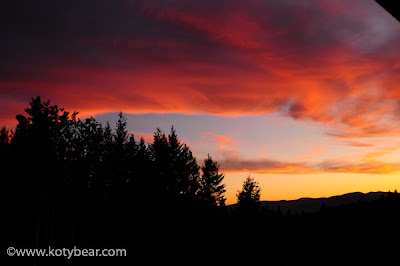 SUNSET OUT MY WINDOW

This summer I have invented a new drink. Normally, I don't mix alcohol with mixers. I drink it either neat or with water. But, I found something to which I am well and truly addicted. The great thing about it is it's fantastic without the alcohol! Now please keep in mind I live in the woods and what's new to me may be old hat to you. It's Lipton White Tea Peach Papaya. I mix it with gin and it's the most refreshing drink I think I've ever had. I dubbed it Montana Tea. Seriously, if you haven't tried it you must. It's diet so no wasted calories and as I mentioned straight is delicious too which is actually how I discovered it.

©Kinsey Barnard Photography
Posted by Walker at 8:42 AM 1 comment: