Yesterday we went to see the World Skijoring Championship in Whitefish, Montana.

Kinsey used to skijor with Lakota. She likened it to hooking herself up to an unguided missile. Skijoring, for those unfamiliar with the term, is the practice of slapping on your skis and hooking yourself up to a speedy animal.

The Whitefish Skijoring Championship uses horses for their tow vehicle. These guys go very fast. Faster than Lakota ever could towing you know who. Plus there is a course the skier must hit and jumps he/she must take. It really is fun to watch. If you ever find yourself in Whitefish this time of year you will want to check it out. You'll enjoy the blend of cowboys and skiers. It really is a Montana kind of event.

Below are some photos Kinsey took of the event. 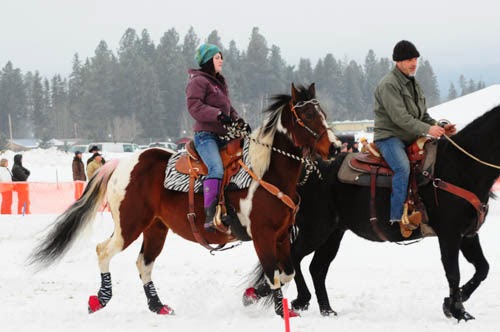 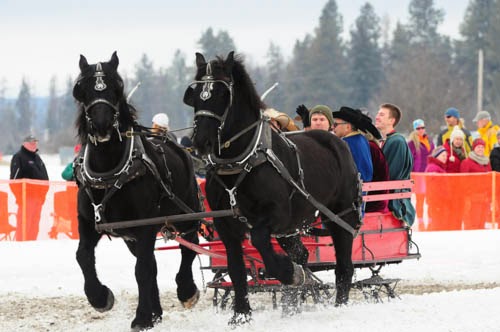 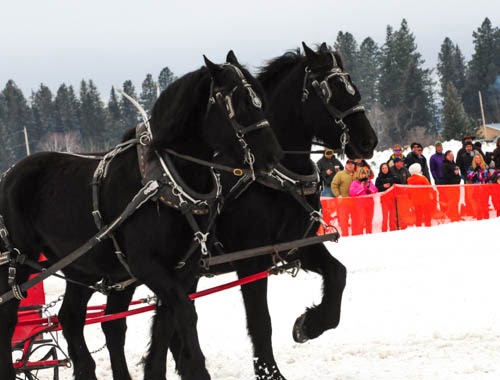 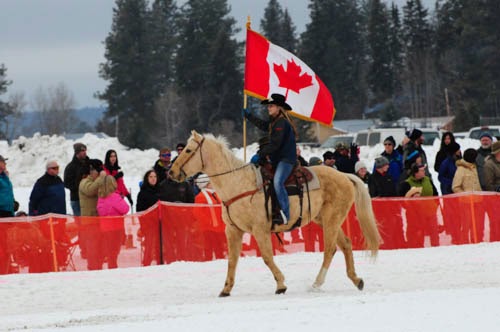 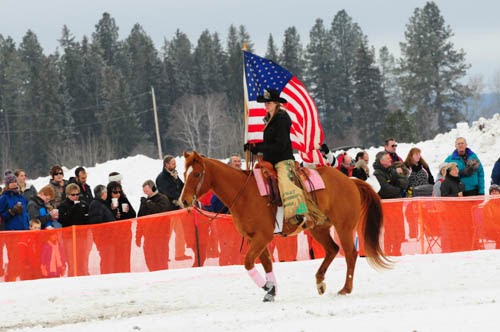 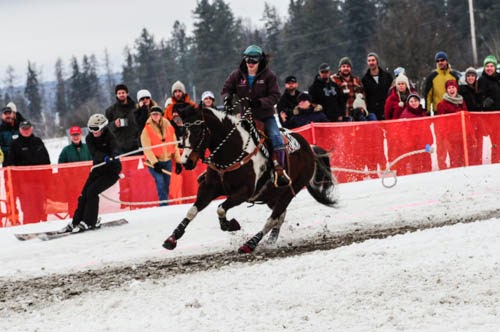 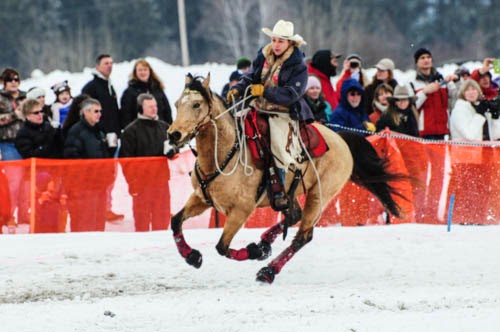 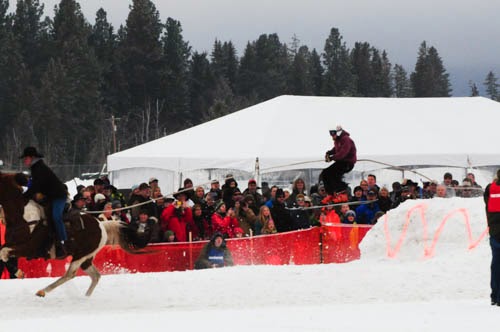 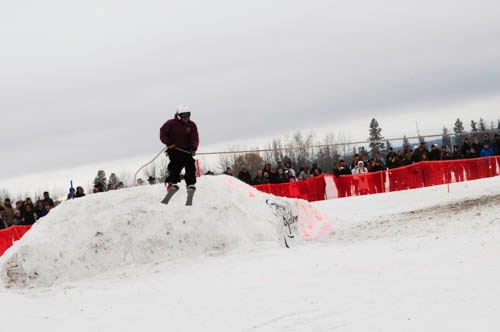 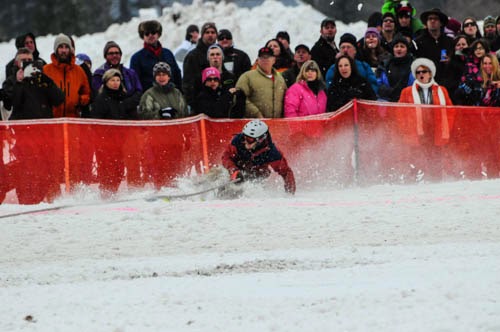 Posted by Walker at 8:45 AM No comments:

A True Story-It happened on Linkedin

Today I turn the blog over to Kinsey as she has an amusing/strange story she wants to tell.

Kinsey here and my thanks to madam Molly for yielding the floor.

A couple of days ago I got and e-mail from Linkedin advising one Yingluck Shinawatra wished to connect with me. If the person is unknown to me, as was Yingluck, I always check the profile of the person making the request to see if we have connections in common. Imagine my surprise when I found that Yingluck Shinawatra is the Prime Minister of Thailand.

I can tell you that I have some very interesting and well known patrons. So, whilst it was a surprise it wasn't unheard of. Naturally, I was flattered. But, I'm always flattered when anyone expresses an interest in me and my work.  I also Googled Yingluck to see if she really was the Prime Minister of Thailand. Sure enough she is but maybe not for long.

I always try to show my appreciation by sending a thank you note to the person wishing to connect. I sent such a note to Yingluck Shinawatra. It wasn't an hour later that I got a rather frantic reply. "Did I ask to connect with you?" "Who are you anyway?". Ooops, there must have been some kind of glitch at Linkedin. I replied and Yingluck promptly disconnected from our budding relationship.

What is so amusing to me is that Yingluck Shinawatra's government is currently under siege and could very well topple. What the heck was she doing on Linkedin? Already sending out job feelers? I don't know about you but if the infidels were storming my palace gates I think I'd have more important things to do than be on Linkedin. She'd better get busy because she had fewer than 200 connections. Not to be boastful but I have over a thousand. I know. I know. It's quality not quantity.

Here is a BBC article from today with the latest on the situation. "Thailand Imposes a State of Emergency"

I don't know the first thing about Yingluck Shinawatra, her government or her policies. She is a public figure and we are not friends. My conscious is clear in telling this tale. As a matter of principle I always wish everyone well and that goes for her too.

Be sure and check out Kinsey's new blog The Liberated Photographer She specializes in true stories.

What's up with this weather? Kinsey qualifies for Medicare

For crying out loud. What's up with this weather? My winter sports activities have been greatly reduced by unseasonably warm weather. Kinsey was supposed to take me snowshoeing and x-country skiing but there hasn't been any fresh snow in the past ten days and there's none in the forecast for the next ten. Bummer!

Kinsey says it's the sunniest winter she's seen in 12 years. There is a positive side for her, since she pays the bills. Our solar panels are pumping out energy like never before, in winter. The way things are looking, between our credits for excess production in the sunny months and the sun we've had, we may not have to pay anything for electricity this year. That warms the cockles of Kinseys heart. She is such a tight wad.

Kinsey is also quite the klutz. We were going to get out for a little cross country skiing but she slipped on the ice and twisted her knee. We did get in one short go on the snowshoes. Kinsey bot a new set and we took them out for a test run. She likes them! They are called MSR Evo Ascent. Click here to see what they look like.

In other news, Kinsey turned sixty five last Sunday. I think she was a little bummed. I don't think it's the sixty five that got to her so much as the fact she qualifies for Medicare.

Since Kinsey is babying her knee right now she went to see The Wolf of Wall Street. I got to stay in the car. When she got back she said it was a waste of time. Three hours of swearing and gratuitous, pointless sex scenes. Apparently, they use the "F" word over 500 times! Wow! She said even the guy selling the tickets was warning people about the sex and language. She said she actually saw a couple walk out. She might have walked out too but you know how she is about getting her money's worth.

Kinsey thought staying home and watching "Wall Street" and Gordon Gecko again would have been more entertaining. But, what does she know? Wolf has been nominated for the Best Picture Oscar. Although, she suspects the nomination had much to do with Hollywood's love affair with Scorsese.

That's about it from sunny Montana. Will write as soon as something interesting happens. Praying for snow!

Posted by Walker at 7:45 AM No comments:

Seems like the Arctic Express is headed our way. We'll be dropping down into the single digits tonight but nothing like the Mid West and East Coast are getting. CNN says they will be getting temperatures not seen in 20 years. We got just three inches of snow over night and that appears to be about it for this storm.

Me, I love this stuff, but I feel sorry for people and pets who have nowhere to go to get warm. Kinsey and I both count our blessings. Right now she is cooking her breakfast on the wood stove. It's not that she has to, it's that she likes too. We'll never get cold because Kinsey works like a demon in the good weather months to get us plenty of firewood. It's always warm and toasty in our little house.

Not a very special way to start the new year for a lot of folks but maybe it's better to get the crummy stuff out of the way at the beginning of the year.

Anyway, this post is just to let you know Kinsey and I are thinking about you and wishing you well! Stay safe and stay warm. the best way to do that is stay home. :)