It has been real hot here in northwest Montana, eighties and nineties. I suppose if you're from Las Vegas that doesn't seem like much. For us here in Montana it's pretty darned warm. We've flirted with triple digits on more than one occasion and it looks like more of the same for the foreseeable future.

Yesterday, to beat the heat, we set out early to wander the woods. Most animals use the same strategy. They are more likely to be seen out foraging in the cool of the morning.We were walking along enjoying the crisp morning air when we rounded a bend in the trail and there it was, a black bear. He wasn't actually black he was brown. I'm told there are as many brown black bears as there are black black bears. Go figure. The bear was maybe a hundred feet in front of us. This was the first bear I have ever seen. I was pretty darned excited. As soon as I started jumping up an down straining on the leash the bear took one look at us and headed off into the forest. I think we were both glad I was on the leash. Kinsey tells me I will be on the leash, in known bear country, until I am 100% voice command reliable.  Mostly likely even after I am recall certified I will be on a leash in bear country.

This self imposed leash law is not only for my safety but Kinsey's as well. Kinsey has been wandering the Kootenai Forest, which is definitely bear country, for eleven years now. In that time she has encountered at least 50 bears. Never has there been any reason for concern or fear. But, as Kinsey is always telling me "You need to use your head for something more than a hat rack". One school of thought on bear safety she strongly agrees with is keeping your dog on a leash whilst hiking in bear country. She always kept uncle Koty on a leash. In Koty's case it was initially because he was a natural born runner.  As the years went by she realized it was a good idea for safety reasons as well.

Here's why. You know how us dogs like to range a little when walking with our humans? If we should scamper ahead and encounter a bear it is quite likely we are going to hightail it right back to our leader, that would be you. I sure know I would. Chances are pretty darned good that that bear is going to follow. Everybody loves a good game of chase. This could definitely lead to a very  unhappy outcome.

We also heard a pack of coyotes nearby. That was far spookier to me. I did not like the sound of them one little bit. They made kind of a surreal sound. The dark forest only made it creepier. I guess my wariness was well founded because Kinsey tells me a pack of coyotes could very easily make short work of me. I think I'll avoid coyotes.

©Kinsey Barnard
Posted by Walker at 8:46 AM No comments:

I AM SO PROUD OF MYSELF!

I am so proud of myself. For several weeks now Kinsey and I have been working on the long line. Practicing "Wait" Stop" and a whistle recall. The line is thirty feet long. When I'm about two thirds of the way out Kinsey calls "Stop". I'm supposed to stop no matter what and return to her. I'm real good at it when there isn't anything else competing for my attention. The big thing for Kinsey is that I not chase the deer which roam all over our ranch. And believe you me that's a distraction.

When I was really little I just sat and watched the deer. You can see photos of my cute little self in this post Watching Over My Deer Flock back in April. As I grew older, I am now 8 months as of yesterday, I started thinking chasing them would be a lot more fun. Before long I was obsessed with chasing them. I would go absolutely whiz bang nutty. This led to my getting my wings clip as in I lost my unsupervised free roaming privileges.

This morning I had a major breakthrough. We had been out practicing on the long line. When we got back there was a deer on the knoll across from the house. I saw her but tried to ignore that I knew she was there. Kinsey made me acknowledge its presence. She took me over to look right at it. I shuddered with excitement. I couldn't resist. I took off to go get it. At the very same moment Kinsey hollered "STOP!" And I did. I DID!

I was still on the long line but I stopped all by myself before I got to the end. I've never seen Kinsey so excited. You would have thought I'd won Westminster. I know I still have a lot of work to do but this was a real breakthrough moment for both of us. I know I'm going to get then hang of it.

I think my photographer needs a photographer. It's pretty hard to train and take photos too.  Below are a couple of photos Kinsey took of me this week in the flea bane. I like wildflowers. 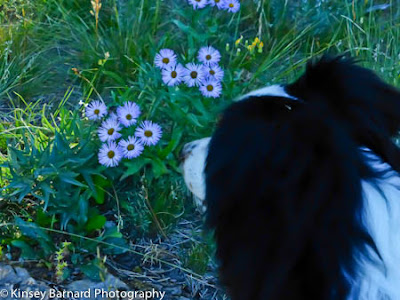 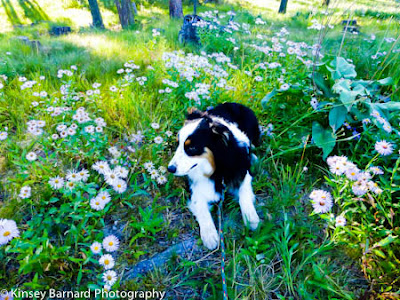 ©Kinsey Barnard
Posted by Walker at 11:31 AM No comments:

GET A DOG, YOU'LL LIVE LONGER


Kinsey subscribes to this health letter written by Dr. Marco Micozzi. She thinks he has some valuable ideas about health that are not mainstream. Today she got the below message about the health effects of owning a dog. Wowzer, I knew I was important but I may be more important than I thought. Kinsey and I have an awful lot of fun and she seems very happy most all the time. I think it must be me!

Micozzi doesn't mention it but I'll bet all that adrenaline I get pulsing through Kinsey's veins when I defy her is good too! Keeps her on the ball!

"The American Heart Association (AHA) just reported that dog owners appear to reduce their risk of cardiovascular disease. But remember, scientists want to know how this works. Not just that it does work.

Why do dog owners reap such terrific health benefits?

Well, the answer may have to do with how dogs evolved. Dogs have some relatively unique characteristics that helped them become "man's best friend."

As members of the Canis familiaris species, they descended directly from wolves (Canis lupus). And wolves are unique because they are social carnivores at the top of the food chain.

Typically, animals who occupy the top of the food chain--like bears or big cats--are solitary hunters. It takes a lot of territory to provide enough food to support such large animals.

But wolves are different.

They live and hunt in packs. And that kind of cooperative effort makes them closer to humans than any other large, "top-of-the food-chain" animal. And it may help explain why early humans began living and hunting with semi-domesticated wolves. Eventually, some of these wolves evolved into domesticated dogs.

This "familiar" relationship with Canis familiaris--first forged thousands of years ago--continues to this day. Russian research shows that among all animals, only dogs will follow a human's gaze. Or follow where a human is pointing.

Plus, those who work in natural medicine have known of the health benefits of owning dogs for a long time. We even included a chapter on "Animal-Assisted Therapy" in my 2005 textbook on complementary/alternative therapies for cardiovascular disease with Drs. Bill Frishman and Mike Weintraub at New York Medical College.

And as I said earlier, the AHA just issued a report that discovered dog owners appear to benefit from a reduced risk of heart disease.

Of course, you may assume this happens because dog owners go for long walks with their dogs.

Indeed, as I told you yesterday, even short, 15-minute walks after dinner lowers your risk of developing diabetes. But very few people meet their exercising goals. So, it is good health advice to get a dog--for the exercise benefits alone.

But there is more to it than that.

According to the AHA, dog ownership has many psychological and sociological benefits. Just the presence of a dog in your home appears to help lower stress and reduce your heart rate.

In one controlled clinical study, 50 stockbrokers began taking medication to control their high blood pressure. Half of them also adopted a dog. Six months later, the dog owners were markedly calmer under stressful situations.

But stockbrokers and other big city dwellers beware. The researchers found a big difference between dog owners who walked their own dogs versus those who paid others to walk them.

Is it really just the exercise?

The CDC says that pet owners are just as likely to be overweight as people without pets.

No matter what, there are always good reasons to have a dog.