THE MEDICAL IMPLICATIONS OF THE NUCLEAR AGE

Up until the Fukushima incident I was pretty ambivalent  about nuclear power. Since Fukushima I have become rabidly against it. I have no particular scientific expertise in the subject. But, I have been blessed with an independent spirit and common sense. And my common sense says nuclear energy should be banned.

Before Fukushima I avoided x-rays like the plague, no dentist x-rays, no mammograms and no airports. Since Fukushima no fish.  And since watching this video, The Medical Implications of Fukushima, Chernobyl and the Nuclear Age this morning, no more Hershey's chocolate.

I highly recommend you watch this video. Dr. Helen Caldicot does an excellent job of telling it like it is with respect to nuclear energy and it's ramifications. It's some pretty scary stuff and you will need to set aside an hour to watch it all. This lecture makes it abundantly clear the fallout from Fukushima is under-reported and that our very existence hangs by a thread, not merely because of Fukushima but because of all the reactors and weapons out there.

Just out of curiosity I Googled to find a map of all the nuclear reactors in the United States    also some very scary stuff. I didn't realize there were so many.

Makes me wonder if all the hooptie-do about global warming isn't just misdirection. If you believe Dr. Caldicot, and I do,  will be damned lucky to survive long enough to have it become a problem.

Most late afternoons Koty and I take a walk around the property. With the return to standard time late is suddenly getting early. The walks are mostly just for our enjoyment but it's also when I look for work that needs to be done or finished.

This is burn season, a time when one can burn the slash accumulated since spring without starting the whole forest on fire. Fuel reduction is one of my obsessions. Pine beetles have been at work in this forest and they have killed a lot of trees. Many of those trees stand like giant torches just waiting to be lit. If a fire were to start this place would go up like a torch. The practical reason for the walk this afternoon was to check on a fire to make sure it was burning down as planned.

After tending to fire duties I decided to walk along Koty Bear Creek. I love to listen to the sound of the water cascading down the mountain. Whilst walking along the creek I came across this spider web spread over an old wound in a spruce trunk. It was so perfect in it's design and construction. The first thing that popped into my head was Charlotte's web. I didn't see Charlotte but she had built one fine web.

I have walked this property thousands of times and always marvel at the new and interesting things I see. I am constantly amazed by the industry and the artistry of nature. 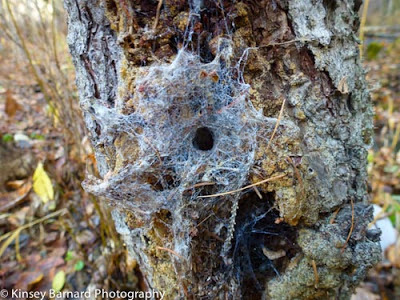 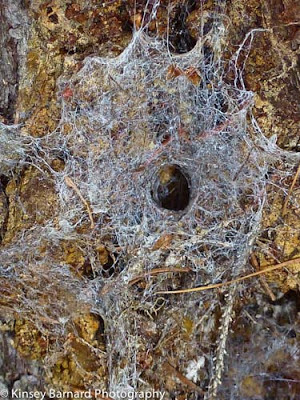 ©Kinsey Barnard
Posted by Walker at 7:28 AM No comments:

CAT IN A TREE

Tiny Tim continues to provide lots of entertainment. He can't seem to get enough of the being outside and weather seems to be no deterrent. It's been cold. It's been raining. It's been snowing. And, the little bugger is screaming to go out.

This photo was taken this morning. Timmie is perched in a 100 year old apple tree down in our meadow. 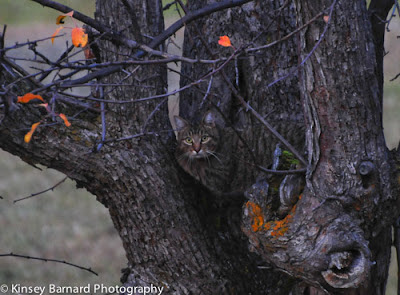 He's got some pretty good camouflage going on.

GOLD - I WAS WRONG

I am, at heart, a buy and hold investor. The trick is knowing when to buy and hold. As in life, everything in the market runs in cycles. If you buy at the top, or near the top, of a cycle buying and holding can be a very painful experience. Timing is critical short and long term. "Timing in life is everything" is one of my favorite sayings. That is especially true in investing. People who bot at the previous top in gold of around $850/oz in 1980 were in for one heck of a wait. It took until 2008, nearly 30 years, for it to return to that price. Who's got that kind of time to wait? And what about those folks who invested in the NASDAQ in 2000? Their wait is far from over.

In 1998 I started studying gold and the gold market. I became convinced it was a buy and hold investors dream. Gold was universally loathed, as an investment.  In 1999 I started buying gold and gold shares.  Gold was selling at around $300/oz. The HUI, the gold bug index, was averaging in the 60's. I told everyone I knew to buy gold and or gold shares because I was convinced gold was going to $1500/oz.  I got two distinct reactions to my suggestion; a glazed look or a pity the poor fool look. Pity the poor fool was by far the most prevalent. I soon threw in the towel on sharing my insight.

I favored gold shares over physical gold because they provide greater leverage. They also provide more excitement. By 2000 the HUI had been cut in half. There have been times when the sell offs in gold shares have set my hair on fire. I was undeterred in my vision and have held through it all. The HUI has been as high as 600. Ten times your money in ten years isn't all bad. Gold got quite close to breaching $2000. On Friday gold closed at $1678 after dropping nearly $40. The HUI is back 475.

This weekend I will be preparing a shopping list as I intend adding to my gold share collection next week. I must be crazy right? I don't think so. I was clearly wrong about gold going to $1,500. I was too conservative. But then, who could have foreseen The Fed would literally melt down the presses printing money. If you can believe what you hear they intend to provide QE to infinity. It seems they are intent upon destroying the dollar. China is buying gold as fast as it can and encouraging its citizens to do the same. Hmm, I wonder why that is? Could it have something to do with this old saying "He who owns the gold makes the rules"?

Gold has been in a correction for awhile now and Friday may have been the final flush out. If we aren't at the bottom we are getting very close. I think this presents a very attractive opportunity to hop on the gold train if you haven't already.

I was wrong about where the price of gold was headed. But, in 1999 $1,500 sounded to most people like the prediction of a madwoman. I may well be a madwoman, living out here in the Montana wilderness with just my dog, my cat and my camera. But, in view of the world in which we find ourselves, this madwoman now thinks $3,500/oz. is not unrealistic and may also prove to be too conservative.

Even a buy and holder sells one day because the trade has run it's course and there is a new opportunity waiting in the wings. In my opinion that day is still a ways off for gold and the best is yet to come. If you don't own any gold shares or bullion you might want to get some.Your trade won't last as long as mine but I wouldn't be surprised if there isn't another five to eight years left. Those years will include the manic/panic stage.

If I turn out to be right I won't tell you I told you so but please don't tell me I didn't.

Posted by Walker at 8:41 AM No comments: