We've just returned from four months in the Flathead. Whilst we were away a friend looked after the place for us but things never are quite the same as you left them despite others best efforts.

From the outside everything looked A-OK. But, when we got inside it was a horse of a different color. Our friend told us that he had seen mouse activity in the house and had put out traps. Using peanut butter as bait he reported success. That was a relief. We've never had mice before and didn't want to start.

When we entered the house we found more success, two traps had captured miscreants. But, not before they had really done a number. There was mouse poop everywhere; In cupboards, in the pantry, in bedding. In addition to the droppings they had chewed on the comforters and any material they could fine. When Kinsey pulled back the comforter on her bed she met with a pile of poop on her pillow. Sweet dreams Kinsey! The bugger had eaten a hole through the pillow case.
It took Kinsey hours to clean everything up.

The really strange thing was the mice seemed more interested in pooping and collecting nesting material. There were many food items they could have easily gotten into but the only thing they got at was a package of brown sugar. Perhaps that is a testament as to how cold it gets around here. Apparently, staying warm was a bigger priority than food. Hah! Food is always be my first priority.

As mentioned, we have never had a mousse problem before. Kinsey was perplexed and then it struck her. When she redid the kitchen she switched to hardwood floors. The hardwood raised the floor three quarters of an inch. The vent on the dryer is fixed, not that flexible tubing they used to use. There was gap. Kinsey fashioned a screen out of construction cloth and is hopeful this will remedy the situation. Warmer weather should help too.

Now that the mouse house party is just a memory we are so glad to be back at our peaceful sanctuary. I am so glad that I can run like the wild child that I am. I can really stretch my legs and race wind the wind. I am so very fast and so, so happy to be home!

THE HEART OF EVERYTHING THAT IS

Golly, where does the time go? It's been two weeks!

Not really my fault. Our usual mid January thaw started on schedule. We were waiting for winter to return but it never did. Now Kinsey is in spring mode which involves all kinds of activity. There is so much to do and none of it particularly interesting. Not fun to me any way. It's mostly maintenance stuff. Shadow had a dead battery. Turned out the battery had gone kaput. Not bad considering it was the original battery. Took half a day to get it replaced. Mr. Toad, the 6 x 6 needs servicing. The lawn tractor needs servicing. Clementine will have to have a trial run to see if anything has run amok over the winter. And, on and on. Boring!

Kinsey is also plotting our annual spring junket. Over the winter she read a biography of Red Cloud, a warrior chief of the Oglala Sioux. She now has it firmly implanted in her brain that she must explore "The Heart of Everything That Is". She's pouring over maps and marking spots from the book she wants to see. For some strange reason Red Cloud has really fired her up. Understanding Native American history and culture is a real passion of hers. I'm just as glad because it means more travel fun for me. You may recall we went to visit Chief Mountain last spring.

Meanwhile, I just make do. Below I am helping change the sheets. 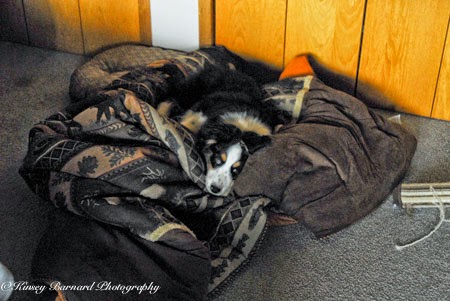 As soon as I get to do something interesting I'll let you know.

©Kinsey Barnard
Posted by Walker at 9:44 AM No comments: