Hoping everyone had a lovely Thanksgiving.

The high for us was around 22F. Kinsey decided it was a good day to go hunting for photographs. What made things interesting, to her at least, was we had a hoar frost going on. That's when there is a lot of moisture in the air and the temps are low. The moisture turns to ice crystals and clings to everything. Kinsey says it's beautiful and reminds her of a scene in Dr. Zhivago.

I like to be out in just about any weather. I thought Kinsey was a little nuts to be slogging around in it. But, when she's on the hunt with her camera there is no stopping her. She may have gotten a little cold as I noticed she had a couple of shots of Bombay Sapphire with her T-bone steak which she BBQ'd on the deck. She was telling her friends who called that it was a "balmy" 22!

Without further ado, here's what our Thanksgiving looked like. Ok, so it's mostly me. I'm just as pretty as any hoar frost don't you agree?

Kinsey actually did capture a scene she liked well enough to put in her  "The Beauty of Ice" collection. But, I don't see why she thought that was nicer than the one below with me in it. I think I dress up any scene. Just click on the link to see her idea. I mean if you want to waste your time.

Happy Thanks giving to all.

It's quite cold here in northwestern Montana. Can't seem to get above freezing and single digits are in the forecast.

Hope everyone has a great day! 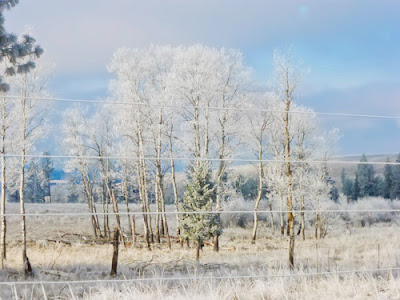 Posted by Walker at 7:46 AM No comments:

Well, we are no longer up to our butts in snow but it is colder than a well diggers behind. We have been down in the low teens for several nights now. The days never above freezing.

Personally, I don't really mind it. I jump in the ponds and the creeks without a care. I'm not jumping in the ponds at the moment because they are frozen solid. This is a new experience for me, the frozen ponds. Don't know quite what to make of it. Kinsey encourages me to stay off. She probably wouldn't want to rescue me if I got on a weak spot and fell through.

For now we are sticking close to home. Hunting season will be over in about a week and then we will take some walks up the mountain. I look forward to that. By then we probably won't have to worry about the bears. They should be getting cozy in their winter spots. Of course, now the mountain lions are really on the prowl. They pounce on the gut piles the hunters leave.

Kinsey got here first image for the 2013-14 winter season to put in her THE BEAUTY OF ICE collection it is called "WINTER NOSEGAY".  She was very excited about it. For her it's like bagging a bull elk. What the heck is a nosegay anyway?!

More importantly, she got some new shots of me!


Lakota Sunrise passed away in February 2013. Molly Montana is now looking after me so I have turned this blog over to her good keeping
©Kinsey Barnard
Posted by Walker at 8:57 AM No comments:

I ALMOST GOT NAILED BY A MULE DEER!

Well, well, well. Winter has come early. By last Monday morning we had a foot of snow on the ground. This is way early for there to be so much snow. Funny thing is, down in town they hardly had a flake.

Kinsey was caught with her pants down so to speak. She didn't have the studded snow tires on yet nor the snowplow on Mr. Toad. She wrestled around with the plow for about two hours before she threw in the towel and asked the neighbors for a hand.

Whilst Kinsey was battling the plow I was trying to drum up a game of chase with a mule deer that was out on the salt block. I crept up on her, thinking I would surprise her. Apparently, she has little or no sense of humor because she took right out after me and nearly got me with those sharp hooves of hers.  Whew! I made it back to the house just in the nick of time. I'm fast but my legs are short, the snow deep and it was a real nip and tucker. I probably should get a little more respectful. That probably won't happen until I get nicked. Gee Whiz. All I wanned to do was play.

Posted by Walker at 8:25 AM No comments:

Wow! The other day we had a really big wind storm. The trees were whipping around like nothing I have ever seen. Kinsey says it's the second worst she has experienced here. All over the area trees were toppling.

In September Kinsey had a tree faller come in and cut down about twenty weak and dead trees. It was her hope that this would get around some of the mess you have when the trees come down in their own way. Sometimes the trees just tip over and pull up huge fans of earth that your kind of stuck with unless you want to bring in heavy equipment to deal with it. Other trees get snapped off like match sticks. She has been working like a madwoman trying to get those trees cleaned up.

Best laid plans as they say. This old storm came along just as she was finishing up her work in her two favorite spots and then boom ten more trees get knocked down. Wouldn't you know it the two biggest and messiest trees were smack dab in those areas she had just cleaned up. Sometimes Mother nature can be such a meany.

Ever the optimist Kinsey said "Yeah, but think how much bigger the mess would have been if we hadn't gotten those other trees down." Below are some photos of the damage.

Posted by Walker at 9:05 AM No comments: