I GOT TO GO TO BRITISH COLUMBIA!

One of the very cool things about being a puppy is that just about everything is new to me.

Last week I got my very first trip to British Columbia. Such a trip doesn't require a lot of travel from where I live. In fact, our ranch is only a mile from the border on the Montana side.

Kinsey has this place she really likes to visit on the Bull River. It's called the Rocky Mountain Big Horn Sheep Project. It was my first time but Kinsey has been coming here for ten years. The Bull river runs through the project and has the most beautiful aqua colored water I have ever seen. Kinsey says this is because the river is fed by glacial waters. The river was low because it's been so cold there hasn't been a lot of melt yet but it was still pretty.

I got to get my feet wet in the river but I was none too happy Kinsey wouldn't let me off my leash. I think she was afraid I would do something stupid like go out too far and get myself washed away.  Anyway, it wasn't nearly as fun as our recent trip to the Koocanusa(see photos)

There is a nice hiking trail in this place so we set off on a walk to see if we could find the sheep. We didn't have to go far before we found them lounging in the sun on the side of a hill. It was probably a good thing I was on a leash because I got a little excited. Kinsey got excited too because there was a ram in amongst the ewes. She's only seen a ram here a couple of times in ten years. Usually, it's just the ewes and frequently it's nobody at all. The sheep just watched us and didn't seem to care much that we were there. They were a little curious about me as I was about them.

After Kinsey took some pictures we took off on the trail and had a good hike. There is still a lot of snow on the Kootenay Rockies. The mountains were very pretty.

I really like this British Columbia place and hope we come back here a lot! I know Kinsey likes it too so I'm betting we will. Yey!

Posted by Walker at 7:12 AM No comments:

Yesterday was packed full of fun.

In the morning I got to go down to get my feet wet in Lake Koocanusa. The Koocanusa is this 90 mile long, man made lake that runs from Libby Dam all the way into British Columbia. We have a nice view of it from here at the ranch.

Anyway, we went to this place called Peck Gulch.  Right now the lake is really low to allow for the coming snow melt. This left lots of space for me to romp around. And, boy did I romp. (See photos below)

It was sunny but really cold. Didn't bother me any but heard Kinsey say she wondered how I could stand to be in that cold lake. Me, I found it quite refreshing.  Just made me want to tear around all the faster.

After lunch Kinsey headed out on the four wheeler to block up a fallen tree for fire wood. I'm still leery of that four wheeler thing so I just ran along in front. Leading the way to where I had no clue. I didn't know anything about chainsaws before today. When she fired that thing up I right away knew I wanted to keep my distance from it. What a racket! I busied myself exploring around the area.

What an extra fun day this was.

WATCHING OVER MY DEER FLOCK

We've been very busy here at the ranch. I'm mostly supervising Kinsey's work. I also give her play breaks which we both enjoy. Yesterday we did a bunch of brush burning. I'm not real keen on fire. I'm also not ready to make friends with the four wheeler. I'll keep my own four on the floor thank you very much! We also took the kayak out to the big pond. I thought about trying to hop in the kayak with Kinsey but chickened out.

I'm getting taller, which is really cool. I can reach things on the counters, I'm not supposed to jump on, way better. Growing has it's advantages. I recently snagged a cube of butter. Unfortunately, Kinsey is catching on to my increased stature and is moving things and farther from my reach. I also got a hold of her Kindle. Whoa, that wasn't a good idea.

There are bunches of blacktail and whitetail deer hanging about. Since we don't have any livestock I pretend they are my herd and keep watch over them. I've decided they shouldn't get too near to the house so I push them back sometimes when I think they are too close. But, those dudes are big and sometimes they push back! I nearly got clobbered in the head the other day. This is dangerous work! Below are some photos of me tending my deer flock. 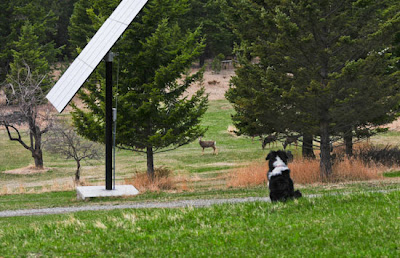 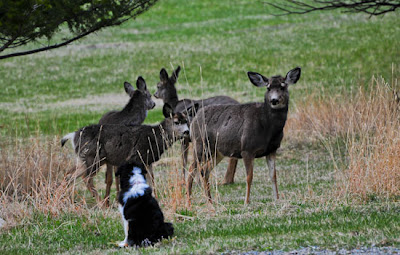 Well, not really. I was such a brat yesterday I thought Kinsey might dis-own me. I mean I was into everything. The best trick I pulled was dumping over the trash can right after she dumped the vacuum dirt in it. I mean there was fine dust everywhere and my little white toes were brown. You shoulda heard her squeal!

I know I'm not supposed to get in the trash but the reaction I got to dumping it was just too delicious. It was so much fun I invented a new game. I go and flip the lid just enough to make a clap and Kinsey comes running. This is so much fun!!!

It was washing the bed sheets day and I really helped out there. (See photos)

Every time Kinsey let me out to get rid of me, there I was right back at the door. No getting rid of this rapscallion. I thought she was going to pop her top. I did qualify for a couple of time outs in the crate. I didn't care though because each time I was ready for a nap anyway. By the time she let me out I was ready to rumble and I did!

Later in the afternoon I did do something Kinsey thought was very special and redeemed myself a little. A bunch of deer showed up. They came to within 15 feet of me and I just sat on the deck steps and watched. I don't know what the big deal was but if she likes it, and treats for it, I'm gonna keep on doing it.

ALL MY TEETH ARE FALLING OUT!

Oh my gosh! All my teeth are falling out. Are they supposed to do that?

I was chewing on a Nylabone this morning and spit a molar right out. Kinsey picked it up and saved it. Ewww! Yesterday we were playing fetch with a tennis ball and I noticed a canine tooth lolling out the side of my mouth. Surely this must be natural or Kinsey would be having a fit. I think I can feel some others in there popping up. She is quite protective of me. She kept asking what the little blood spots are on my forearm. I hadn't a clue. Now I think it's from these teeth falling out. Yeah, that has to be it.

I'm learning more stuff around here. I don't much like getting in the 6 wheeler. I fell out of it this winter and it has put me off the thing. Kinsey let's me run along after it and that's good enough for me. We were going to use this torch thing on the grass around one of the ponds but found a tree across the road. Guess next I'll be learning about chainsaws.

I got up inside of Clementine for the first time yesterday. I'm not real sure what that's all about but I'm am sure I'll be finding out. Koty's scent was all over the place. I guess he liked it enough to spend a lot of time in it. Maybe I'm gonna like it too.

Never a dull moment around here I can tell you.