This is a pretty sobering list of observations regarding America, from a Canadian no less.

TOP-10 "ONLY IN AMERICA" OBSERVATIONS - BY A CANADIAN*

1) Only in America could the rich people - who pay 86% of all income taxes - be
accused of not paying their "fair share" by people who don't pay any income taxes at
all.

2) Only in America could people claim that the government still discriminates against
black Americans when they have a black President, a black Attorney General, and
roughly 18% of the federal work-force is black while only 12% of the population is
black.

3) Only in America could they have had the two people most responsible for our tax
code, Timothy Geithner, the head of the Treasury Department and Charles Rangel
who once ran the Ways and Means Committee, BOTH turn out to be tax cheats who
are in favor of higher taxes.

4) Only in America can they have terrorists kill people in the name of Allah and have
the media primarily react by fretting that Muslims might be harmed by the backlash.

5) Only in America would they make people who want to legally become American
citizens wait for years in their home countries and pay tens of thousands of dollars for
the privilege while we discuss letting anyone who sneaks into the country illegally just
'magically' become American citizens.

6) Only in America could the people who believe in balancing the budget and sticking
by the country's Constitution be thought of as "extremists."

7) Only in America could you need to present a driver's license to cash a check or buy
alcohol, but not to vote.

8) Only in America could people demand the government investigate whether oil
companies are gouging the public because the price of gas went up when the return
on equity invested in a major U.S. oil company (Marathon Oil) is less than half of a
company making tennis shoes (Nike).

9) Only in America could the government collect more tax dollars from the people
than any nation in recorded history, still spend a Trillion dollars more than it has per
year - for total spending of $7-Million PER MINUTE, and complain that it doesn't
have nearly enough money.

10) Only in America could politicians talk about the greed of the rich at a $35,000.00
a plate campaign fund-raising event.
Posted by Walker at 7:09 AM No comments:

This morning I came across the blow quote from Carl Sagan. It really blew my socks off. Talk about a visionary.

I hope you can read this. It's as big as I can make. 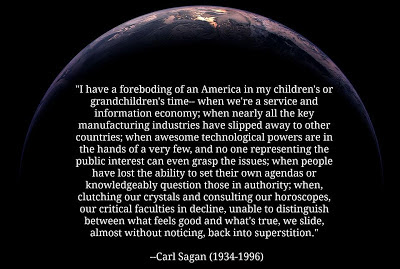 Posted by Walker at 8:57 AM No comments:

It has been some time since I posted to the blog. What with the holidays and I just didn't have anything I wanted to share I decided to take a little hiatus. I hope everyone had a very Merry Christmas and Happy New Year. We certainly did here at Dancing Deer. It was white an wonderful.

Koty continues to struggle with old age and Cushing's. He's lost so much hair I marvel at how he still loves to be out in the very cold. He wears a neck gator, a friend knit for him, all the time as his neck is completely bald. He's slowed down but his quality of life is tip top. I am now able to let him roam free on the ranch. He loves to trot down to the pond to get his water and I love to watch him. In these last days of his life we are bonding in new and beautiful ways. It fills my heart to breaking.

The winter has been mild so far. The temperatures have been mostly in the 20's,  great for hiking. Everyday Koty still pesters me to no end to go for a hike and so we do. Winter is a magical time in the woods. And I truly treasure the time we spend in them.

Timmie has finally given in to the cold and spends the bulk of his time indoors. He's not so tiny anymore either. He's packing on the poundage at a prodigious rate as most of us do who live in this climate.

A friend sent me this video and I just had to pass it on. If it doesn't bring tears to your eyes you've already passed on. It is especially meaningful to me because it reminds me of what a fortunate person I am to live where I do and see what I see. This is my life. And sometimes I take it for granted because it is my life. Watch and enjoy!!! ROCKY MOUNTAIN ELK FOUNDATION
video. A masterpiece.

©Kinsey Barnard
Posted by Walker at 8:24 AM 3 comments: