I must admit that being a “snowbird” in Arizona is not for the likes of Koty and I. And, it was never our intention. Our original plan was to photograph the Gulf Coast and up into the Piney Woods region of Texas. But, alack and alas, it was not to be. For a re-cap of how a trip to Arizona came about read Making God Laugh.

Well, we tried to put a good face on it but living like a sardine in a can just isn’t for us. We met many great people who will be friends forever but it’s just not for us. We never would have done it either if I had not been spooked by Park a mangers that told me I had better book fast because there would not be any place to stay. Well, that was simply poppycock. We could have traveled around Arizona just like we always do with no problems about getting a space. Live and learn. I learned!

Enough about that! On March 13th, with great anticipation, we left Apache Junction for Camp Verde. We were not disappointed. The RV Park we chose, Zane Grey, was a breath of fresh air. Situated along a creek, the park was dark and silent at night. Something we hadn’t experienced for four months! The management could not have been more helpful and fellow campers were too.

Camp Verde is a quaint little town maintaining some of its old west flavor.

The photos below are of an old feed and tack shop on the main street. I just love these types of displays. To me they are so colorful and interesting. Make me a little nostalgic. 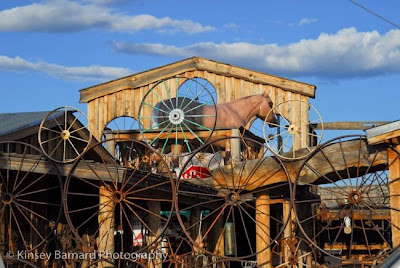 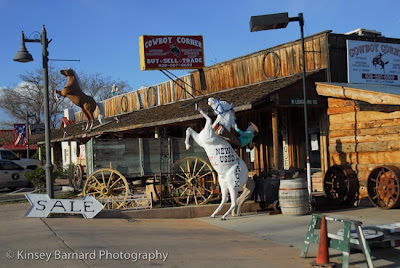 The area is chock full of Indian ruins. Some are now National Monuments but there are plenty hidden away everywhere. It would take you forever to find and investigate them all. The three main ones are Montezuma Well, Montezuma Castle and Tuzigoot. 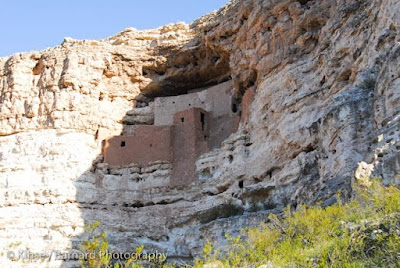 The above photo is of Montezuma Castle. You'll have to bear with me on the photography. Structures are not my forte and if you arrive at the wrong time of day the lighting can be very difficult. In this image you can see the sun is moving across the ruin. In another half hour I would have been out of luck. But, at least you can get some idea what they look like. If one wanted to get a very nice shot you would want to go late afternoon. At least that would be my take.

Here's a little history on the castle."The last known record of Sinagua occupation for any sites are for Montezuma Castle National Monument around 1425 AD. The reasons for abandonment of their habitation sites are not yet known, but warfare, drought, and clashes with the newly-arrived Yavapai people have been suggested. The five-story stone and mortar dwellings contain 20 rooms and once housed about 50 people. A natural overhang shades the rooms and shelters them from rain. Another part of the cliff wall bears the marks of an even larger dwelling, which has not survived." Wikipedia.

Next we visited Montezuma Well which was a well an irrigation system developed by the Sinagua. There are hundreds of images of the Well you can Google. Below is my rendition which is a little different than what you are likely to find. It's a duck swimming in the wells reflection of the cliff dwelling. Much more interesting to me. 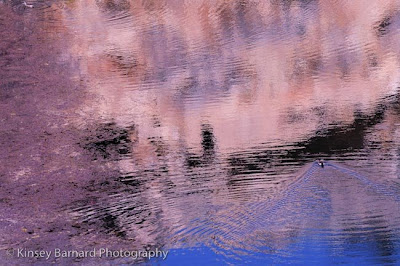 The last ruin we visited was Tuzigoot. This is an out in the open structure rather than a cliff dwelling. 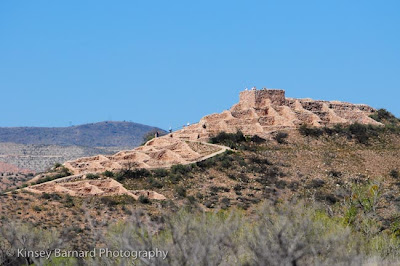 Here's the Wiki "Tuzigoot National Monument, near Cottonwood, Arizona, preserves a 2 to 3 story pueblo ruin on the summit of a limestone and sandstone ridge just east of Clarkdale, Arizona, 120 feet (36 m) above the Verde River floodplain. The National Park Service currently owns 58 acres, within an authorized boundary of 834 acres (3.38 km2) [1].

Tuzigoot is Apache for "crooked water", from nearby Peck's lake, a cutoff meander of the Verde River. Historically, it was built by the Sinagua people between 1125 and 1400 CE. Tuzigoot is the largest and best-preserved of the many Sinagua pueblo ruins in the Verde Valley."

We had a fine time exploring these ruins but exploring back roads is more our cup of tea. That will be coming up next.

PS: I frequently get complaints about people having trouble signing up for e-mail notification. I maintain my own notification list to be sure people who want it get notified. If you would like to be on that list please send your e-mail address to kotybear2002@msn.com
Posted by Walker at 10:02 AM 8 comments: 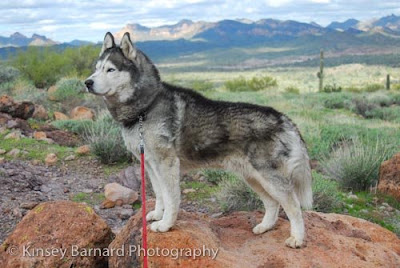 Boy! The last four months have not been uplifting for the likes of Koty and I. We were never meant to stay in one location for two months at a time. We got a little discumbibulated. We won't ever do that again! 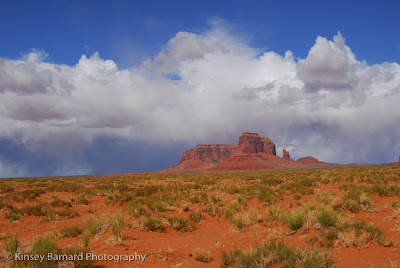 We are on the road again and boy does it feel wonderful! At the moment we are in Blanding, Utah having just come from Monument Valley. All I can say about Monument Vally is WOW! If you have not seen it, it is a must see.

As I get myself organized here I will back track where we've ha e been since leaving Apache Junction and try and get some photos up as well.

We've probably lost all our readers but maybe they will find us again.
Posted by Walker at 8:30 AM 2 comments: