We got on our way at 7:30am. Had to stop at Stein's, the local grocery store, because they had Tillamook Chocolate and Peanut Butter ice cream on special. I just love that stuff. It's usually over $6.00 for whatever size they are now selling. One thing's for certain it isn't the half gallon we used to get for 69 cents!

Had several stops to make in Kalispell. First stop was at Kari Dodge where I had just had Clementine serviced, although service had little to do with it. When I took her in I specifically asked that they check the air in the tires. These days if you don't ask it doesn't seem to get done. I confess I didn't look the bill over too carefully until I got home. When I did look at it I saw that they had charged me $27.00 to "remove the tires" to check the air pressure. I was livid. Clem has duel axles in the rear but the tires have valve extenders. You certainly do not have to remove the tires to check the air pressure. They told me I would have to bring Clem in for them to look at it, if you can imagine.

It was an unpleasant stop. They tried to argue with me that they had made a mistake when they wrote up the order. The charge was to pop the wheel covers! Something that should take about two seconds per cover. I've had the pressure checked fifteen times and no one has ever charged a penny. It was clearly a case of the technician padding the bill. They were not going to give me a credit until the service manager overheard the conversation and he very quickly told them to make the refund. I should also mention I had had the fuel filter replaced at the same time and after I got about fifteen miles from the dealership the fuel filter light came on. I had to drive all the way back to the dealership to find that the same technician had forgotten to plug the fuel sensor back in. I'll be thinking long and hard about returning there.

I had a couple of other, more pleasant, stops and then we headed to Bigfork. Actually, we just drove through Bigfork. Our objective was someplace down past Swan Lake toward Seeley Lake. I didn't really have plans as to where we would stop.

I actually did something intelligent for a change and stopped in at the ranger station in Condon. The gal there told me about Holland Lake. A lake I had never heard of before. We headed straight there and it was a great tip.

We almost had the place to ourselves and our campsite was right on the lake and the lake was picture perfect. 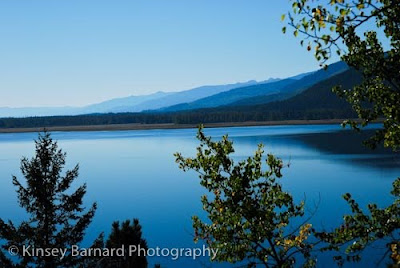 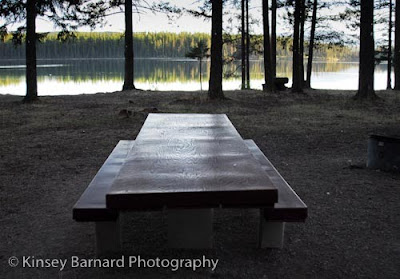 After getting camp set up we took a wander along the shore and found this picture in the water. I thought it was kind of fun with the rocks in the sky. The view is looking east toward Holand Falls and the Bob Marshall Wilderness (The Bob) to locals. 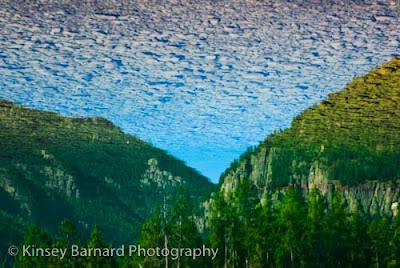 Pebbles in the Sky

Even though it was getting to be late afternoon I decided to hike up and take a peek at the falls anyway. The falls face to the west and the setting sun. Afternoon shots are not too special but I thought we could use the exercise and I could scout the location. The hike is about a mile and a half up along a very pretty trail. And, there are some great lake views as the elevation gain is considerable. But, shooting in to the sun isn't fun. We will set out early tomorrow morning for the serious picture taking.

Still there are no clouds. Where oh where are my Montana skies? 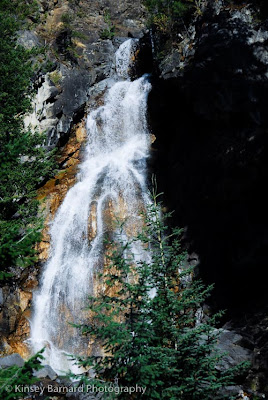 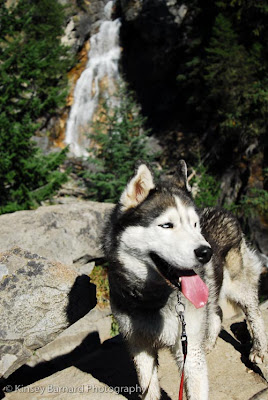 
Back at camp I cooked up a hamburger patty using meat I had purchased at Roseauer's in Kalispell. It was the best ground beef I have had in twenty years. I cooked it seared on the outside raw in the middle. It was beyond delicious.

After the sun had set it became so very quiet and still. The lake is like glass. The air is warm. It is seven-thirty in the evening and I am in a t-shirt. I can look out over the lake and hear waterfowl calling, some type of duck I would reckon. It was a another of those very special moments. I had hoped to hear a loon but that was not to be. 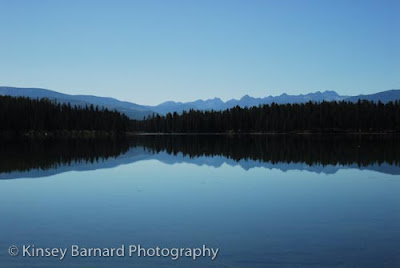 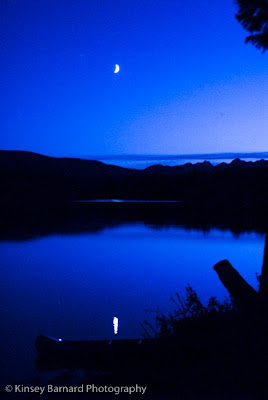 Koty seemed to be very comfortable with our surroundings as well. No people, no phones, no internet. Can't get any more peaceful than that. 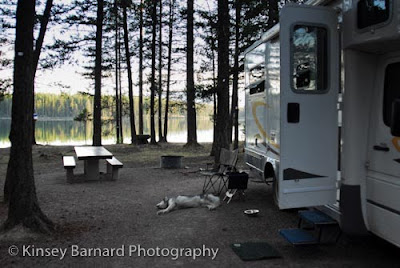 Cost of the campground $15.00/night. Can't get much cheaper than that! :) I tell ya. It's true. The best things in life are free or nearly so.