Nothing gives me more pleasure than to find a great product that I can recommend to the benefit of others. It’s even better when I find the people behind the product are as great as the product.

My home is in northwest Montana. As you might imagine it gets very cold and icy up here. Originally from California, I am now in my tenth year at this location. If there is one thing I have developed over the years it is a healthy respect for ice, living out in a National Forest as I do, just me and my trusty sidekick, Siberian Husky Lakota Sunrise (Koty). 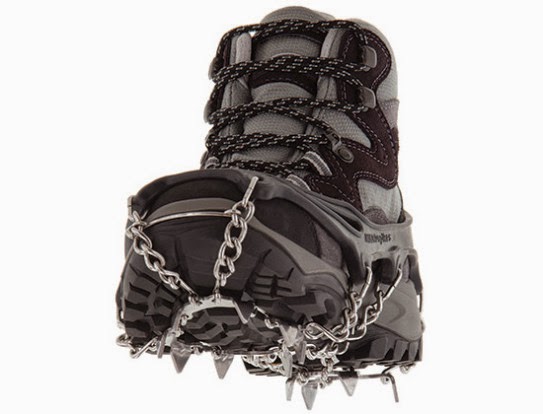 One slip and fall on the ice and life as you know it could be changed forever particularly if you are in that stage of life when the old bones, like the hair, start to thin. Because I am in that stage and live alone in a remote area I am quite judicious in the ways that I interact with my environment, particularly in winter. Not using my noggin could result in serious injury or even death in an icy cold grave. Worse, I could mess myself up so I could no longer live this life.

Koty and I hike almost every day of our lives. It’s an addiction affliction. In winter we tend to stick to the forest roads. I figure if we do run a cropper there’s a better chance of getting found before we become crispy critters. The roads can also be dicy in that traffic packs down the snow and it’s not long before the tracks are slick as grease.

It didn’t take me long to figure out I needed something on the bottom of my boots to give me traction and keep me from falling arse over tea kettle. The roads I travel are in the mountains. They are up and down and seldom flat. I tried everything from Yak Trax to Spare Spikes. None of them gave me a feeling of security, and worse, they fell apart within weeks. A total waste of money.

I kept searching until I discovered Kahtoola Crampons. These babies looked like I could climb Everest. I didn’t care. I bought a pair and was never happier. I could walk straight up sheer ice without slipping. I had never felt so secure walking on ice. I would still recommend these crampons to anyone with the caveat that they are not for urban or suburban walking.

Last winter, after seven or eight seasons with my Kahtoola crampons I had completely worn through one of the straps. I contacted the company and shipped them off to Flagstaff for repair. A week or so later I got a call from Vance White, a Kahtoola designer, who told me my crampons had been repaired and were on their way back. Vance was curious how I was using my Kahtoola crampons.  I told him. He asked if I had thought about trying the Kahtoola Micro Spikes?  I said no as there was no such thing when I bought my crampons and I was so pleased with those I had not bothered to look further.  Vance convinced me I should try them and, since I live in the middle of nowhere, offered to sell me a pair direct.

Shortly thereafter I received my repaired crampons at no charge. A pleasant surprise. I didn’t expect that. A few days after that I got the Micro Spikes. The only problem was it was April so I couldn’t try them out.

Now the snow has flown, the slippery conditions have arrived and I have been out with my Micro Spikes and they work beautifully. An added bonus, they are really easy to slip on and off. The crampons take more effort. I liken them to putting on a pair of roller skates, if you are old enough to remember what that’s like. Another advantage is the Micro Spikes don’t seem to get clogged up with snow. I have had times with the crampons when conditions changed whilst I was out and had sticky fresh snow packed into a ball under the crampons to the point I could barely walk. I purposely took the Micro Spikes into unpacked snow and I had no problems.

I can’t make any claims about how long they will last but they look strong and I think they will hold up well. If for some reason they do fail I also know from experience Kahtoola will make it right.

Not many live the life that I do so the Kahtoola Crampons would not be suitable for the majority. Micro Spikes, however, can benefit anyone who lives in a climate where there is snow and ice underfoot. I think if you do live in these conditions and don’t have a pair of Micro Spikes you are out of your mind. And lookie here, you can even get them at Zappo’s.  Christmas gift idea? Stocking Stuffer?

Kahtoola has great products, great people and great customer service. What more is there?

It may sound as though I am on the company payroll. I assure you I am not. It’s just that there is so much to complain about these day when I find something I think is really worthwhile I get excited about it and want to share it with everyone.

©Kinsey Barnard
Posted by Walker at 8:11 AM