Since it was our last day on the reservation Kinsey decided we should try one more time to figure out which trail leads to Chief Mountain as in one that we could navigate without a machete.
Our first stop was a trail over to a water feature that Kinsey had been wanting to explore. Turned out to be a great stop. Not so much because of the water feature but because we continued on the path until it opened up into a meadow where we found a mare, her yearling and foal.

I totally made a nuisance of myself jumping and tugging on the leash. I dare say, Kinsey was very unhappy with my performance. The horses wanted to come to Kinsey but my shenanigans kept spooking them away.

Despite me she got some decent photos of the horses. 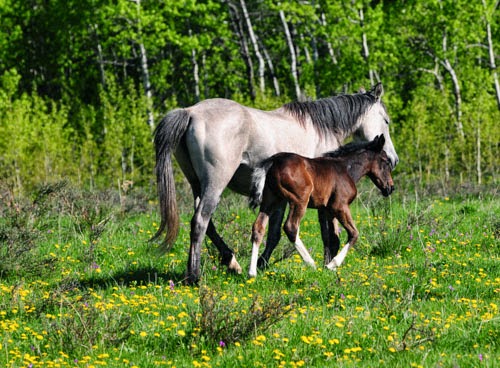 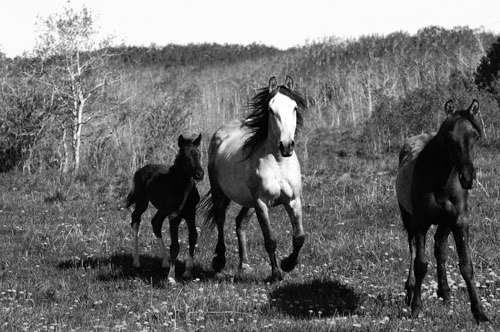 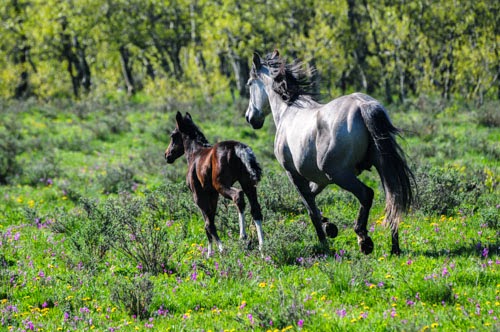 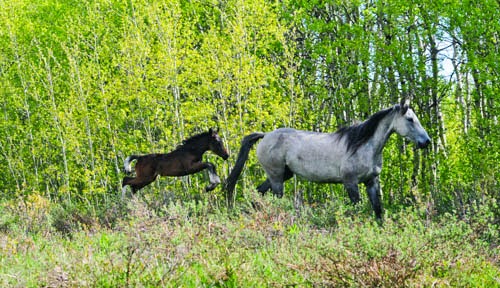 We continued on up the road until we got to one of the last trails we hadn’t tried this trip. Turned out to be the winner. This trail takes right off going up. We hiked in for a couple of hours. That got us to where the flora turned alpine. The trail started to get a little dicey so Kinsey decided it was far enough. She’s not one to take chances when alone in the wild. I wasn’t making things any safer with my continued lunging after ground squirrels and failing to pay attention to her.

We turned around and headed back. Normally, Kinsey looks back on a trail, every now and again, to make mental markers. A trail can look very different going in the opposite direction. Turned out I wasn’t the only one not paying attention. The trail ran up and down ravines. While we were following one trail we were passing others behind us without notice. It wasn’t long before Kinsey was unsure of which trail to follow. I could tell she was getting seriously spooked.

We were probably the first ones up here since last year. With new grass and no traffic there were places where the trail disappeared altogether. We came to one of those grassy places and suddenly there were trails all around us. We tried one but it wasn’t too far before Kinsey was sure it was the wrong way. We returned to the grassy spot. Kinsey wasn’t even sure we supposed to be in this spot. We tried another route but the flora looked wrong, alpine instead of sub-alpine. We went back to the grassy spot yet again. This time Kinsey looked up at the “Old Chief” and said out loud “Chief, I need your help. I have lost my way. Can you help me?” No sooner were the words out of her mouth than she saw an innocuous wood block that for some reason she had mentally marked. She recognized it immediately. We went over to it and not far from it we found the trail down. From that point on there was no doubt we were on the right path. Maybe the Chief appreciated the dance she did for him the other day?

Off down the mountain we went. I could tell Kinsey was really relieved. I continued to be a brat pulling and tugging, still wanting to get one of those squirrels. I totally wasn’t paying attention but those squirrels. Kinsey is really good at spotting game. She says it isn’t so much good eyesight as it is a good eye. A good eye to notice something that out of place in the landscape. While I was being a brat she was noticing something very red in the green grass just in front of us. She knew it was either a cow or a grizzly.

It was a grizzly peeking through the bush at us.. Kinsey tried to get closer. She isn’t a wildlife photographer. Her longest lens is 300m. That is not a wildlife lens. Wildlife photographers use lenses 3 times that to get their photos of grizzlies. While she was trying to get closer I was catching on. I saw that bear and I went bonkers. Jumping, barking and growling. Well, so much for Kinsey’s photo op. That grizzly took off like a shot and disappeared into the forest. I’m in big trouble now. She told me in no uncertain terms we are going to get some professional help with my prey drive issues.


I do get why Kinsey always keeps me on the leash when we are on a trail, letting me off only when we are in a clearing where she has high visibility. If I hadn’t been on a leash when we came upon that grizzly I would have chased it and somebody could have gotten hurt. Most likely me. But, Kinsey too. I could have high tailed it back to Kinsey bringing the bear with me. Hate it or not having me on a leash in certain environments is probably not a bad idea.

Well, for my last day on the Blackfeet Reservation this one was by far the most exciting. Tomorrow we will be packing up Clementine, hitching up Shadow and returning home. Honestly, I can’t wait for our next trip. This road tripping is fun stuff!

©Kinsey Barnard
Posted by Walker at 8:01 AM

Wow, now that was quite a day! I remember when we'd take the horses out on winding trails how different it looked going back the other way. I used to turn around at every junction & try to memorize the way it looked & we still wandered off a few times. Great shot of the grizzly! Pretty exciting stuff!

Judy: It gets even scarier when you are alone and no one on the planet has any idea where you are. Believe me, if we ever get lost WE ARE LOST!

I'm a bright little girl but I'm no tracker. I was of no use to Kinsey whatsoever.