Friday night was freezing here in Tucson. Water was a little sluggish getting through the pipes. Saturday was quite chilly as well. The mountains surrounding the valley all had snow. We braved the elements and headed over to Saguaro National Park East. Dogs are not allowed on National Park trails so we just walk the eight mile loop. It was refreshing!

Saturday night was another freezer. Got down to 37 in the RV. These things don’t have much insulation. Of course, I could turn on the heater but I prefer to pile on the blankets and sleep in the cold. Koty likes it better that way too.

On Friday it seemed all we had to worry about was India and Pakistan getting into a fight. But Israel pre-empted them and attacked Gaza. They warned that they would retaliate and they sure did. It seems like everything runs a cropper at the same time.

This thought occurred to me over the weekend. I keep writing, “People believe what they want to believe”. I wonder if the same principal can’t be applied to Obama. Will Obama be another Bernard Madoff? Most of Madoff’s investors were Jewish and believed they could trust one of their own. I also wonder if a lot of African Americans are not setting themselves up for future disappointment. What made me think of this was Farrakhan’s unqualified support for Obama. And, it is only natural that the majority of African Americans are looking toward him to be a savior. Of course, there are millions of white Americans that think he is a savior too. But, history is replete with the disappointment of false profits. Will Obama be another? Only time will tell.

Obama spends $740 million to get elected. Anybody who raises this much money to win an election has a lot of favors to repay. Frankly, I think it is disgusting that so much money is wasted to buy an election. Because all this is pre-payment for expected favors. These elections have just gotten totally out of hand. Too bad there isn’t some way to just give each candidate a certain sum, which would be a hell of a lot less than $740 million, and that’s all they get to spend. This is just obscene. I sure hope people get what they paid for.

This article says a lot about the man’s strength of character. He can’t even quit smoking, great example setting. Obama’s Efforts to Quit.

Maybe I’m all wet about this fellow. I certainly hope so. One of the reasons I want to put this all down in writing is I want to be able to check back on myself. Check my perceptions against how thing actually unfolded. I’d be happy as hell to be wrong about this guy.
I just don’t understand why investors in Bernard Madoff’s Ponzi scheme are so shocked. There was plenty written about him and his fund, starting way back, that would give pause to a prudent investor. People believe what they want to believe. Early Suspicions About Bernard Madoff.

Here’s an off the wall prediction from a fellow who no doubt has an ax to grind. The only good thing about his prediction is that I get to be a part of Canada. Of the available choices on his map Canada would be mine. As If Things Weren’t Bad Enough

Here’s a prediction from James Sinclair that I really want to keep track of.

Here is my New Years gift to you, my extended family.

There is no way that the CONSEQUENCES of the largest creation of paper money since it was invented can be avoided or even modified. Odds now favor Alf Field’s price objective.

The best part of this gift is not the one you already know, which is January 14th 2011, but rather the date that a new currency form will replace the form of the US dollar as you know it today which is the third week of June 2012.

Don’t laugh! Write this down and do not forget about it!

I think those who believe this bear market will be over shortly are in for a nasty surprise. People believe what they want to believe. I very much agree with this study’s conclusions. So far it’s bang on. Anatomy of A Bear


We couldn't justify watching anymore of the market action, this is kind of like the Twilight Zone, so we headed out for Catalina State Park. We found the "50 Year Trail" and headed down it. It was a great hike. A yawner for photos, on this day at this moment. But, it was lovely. It followed the ridge opposite the Catalina mountains and I see great potential if one can get the moment right. I shall watch carefully until I go.

We returned to our place at the RV park and decided to have the meal we had planned for Christmas, a great huge porterhouse steak. It was beyond divine.

So times are uncertain but life is still very good. I don't think being realistic and enjoying life are mutually exclusive. I think we are in for really hard times but Koty and I are still living each day to the fullest.

No one knows what tomorrow will bring. All of life is just speculation. I prefer to meet life with no stars in my eyes. To quote from the book I am now reading "Hong Kong" by Stephen Coonts "The world turns seven times a week". 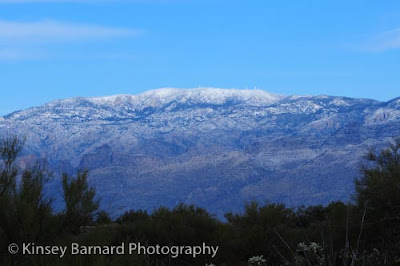 Thanks for sharing.Well Wish you all a tremendous Happy New Year and Wish peace,absolute happiness n prosperity on all the four quarters of the land.