I've been working in the forest, trying to make a dent in the damage that was done by the windstorm. Man, am I out of shape. That six month photo shoot in the south has taken it's toll. Three hours and I'm down for the count. My arms getting so tired I can barely hold up the chainsaw. All the while Koty watches wondering when will will go hiking. Of course, after working with the chainsaw there isn't anything left for a hike. But, I promised Koty I would take him for a hike today and I always try and keep my promises.

I decided we should take the hike to the Marina via Swisher Lake. It was one of those days in Montana when the clouds were strutting their stuff. I love clouds, they are like living things, shape shifting and gliding along. I think we have exceptional clouds here. I love to photograph them. 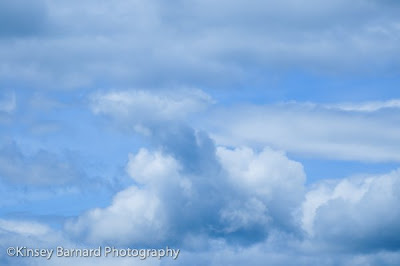 On the way we popped into little Tetrault Lake where folks were trying their hand at a little morning angling. The lake was placid and once again there were those beautiful clouds reflecting in the water. 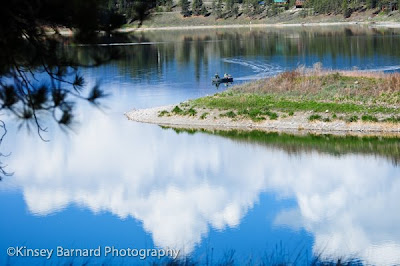 It's about a quarter of a mile walk into Swisher Lake from the road. It too is a little thing but very tranquil. This morning it was particularly peaceful. There was a coyote sipping at the shore and a pair of Canada Geese paddling serenely along. I have no photograph of the scene as I didn't have the proper lens to make anything worthwhile. Some things that I see just remain photographed in my memory. I guess I'm selfish but I like that. 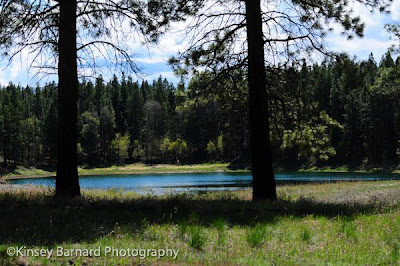 Soon the geese paddled away, the coyote wandered off into the forest and so did we. The Swisher/Marina trail is about six and a half miles long if you go all the way to the marina which is right on the border with British Columbia. It's a very nice trail, no motorized vehicles allowed.

Today I had two objectives in mind, besides giving Koty his promised walk. One was to check for wildflowers and the other was to check out an old snag where some owls had made their nest last year. There were some wildflowers. I thought the one below was quite lovely. I haven't looked it up yet so I don't know what it is besides pretty. Isn't that enough? Unfortunately, there didn't seem to be anyone home at the snag. 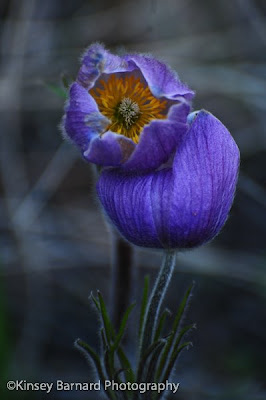 We didn't make it all the way to the marina because I kept taking side trips. On one side trip we wandered down to the shore of the Koocanusa. The lake (reservoir really) runs about ninety miles from Libby Dam straight into British Columbia. It got it's name from Koo (kootenai) can (Canada) usa (USA) hokey but appropriate. The lake is still pretty low because the snow still isn't melting much. I thought last spring was cold. This spring has been even colder than last year. No global warming here, quite the opposite. We did find a place where water was just coming right out of the bank and flowing into the lake. Koty especially liked this discovery as he was thirsty. 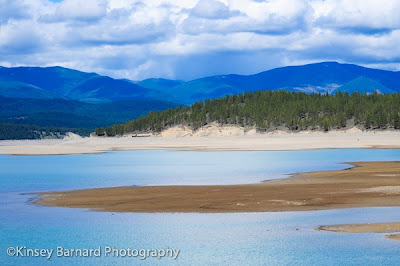 I'd say we probably made it a little more than half way to the marina before I decided it was time to turn back. Koty did not like that idea one bit. I keep thinking Koty is going to slow down a little. After all he is going to be ten in October but absolutely no sign of it yet. He is now older than I am and has ten times the energy. Not fair! 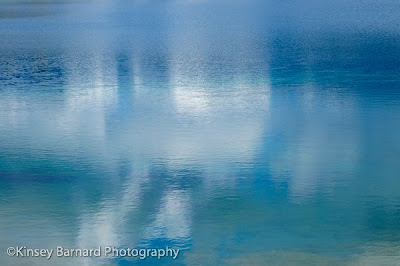 On the way home we passed by Sophie Lake. I love to photograph reflections. This one was of clouds, Mt. Baldy and the Galton Range. Could a painter create anything more beautiful? I think not.

©Kinsey Barnard Photography
Posted by Walker at 7:11 AM

Kinsey the Purple Flowers are divine! Such a good photo too! Nice hiking trip, wish I could of been there...and thanks for taking me there with your photographs. Your friend, Charles Lynn