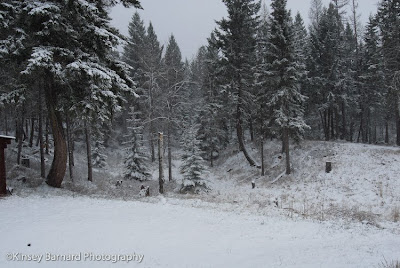 Well, Mother Nature certainly has been on a tear. In the big picture She's got the entire world in a panic over the swine flu and in the little picture She has laid down some crazy weather here at my ranch.

The photo above is what greeted me upon my return home. I thought I had pretty much missed winter but apparently not.

And, if that were not enough, last week She really let her rip. And rip she did with one of the most violent windstorms I have ever experienced. 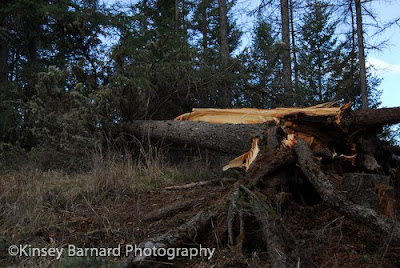 The wind started blowing early in the morning and just kept picking up speed. By 9:00am the power was out as trees came tumbling down on the lines. At first I didn't think anything of it as we get power outages from time to time as well as wind. But, as the day wore on with no power and no let up I began to realize this was different than anything I had ever had here. 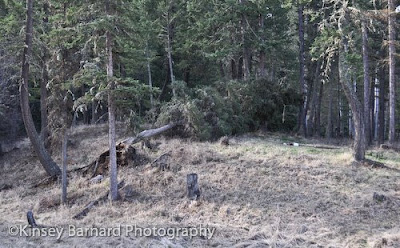 Around noon I was looking out from my deck just in time to watch this big spruce fall in slow motion. The wind sounded like a freight train barreling across the bench upon which we sit.

When I arrived home from my winter trip I found that my freezer had ceased to operate and all the food, several hundred dollars worth, had spoiled. Not being one to take her food lightly I had already gone down to the Flathead to re-provision at Costco. By 4:30pm on the day of the storm I was envisioning losing it again. I called Lincoln Electric to see what the status was. The gal told me it could be out all night. Yikes! About then a light bulb went off as I realized the RV had a refrigerator that operates on electricity and propane. I admit I'm a little slow on the uptake. I started taking everything out of the refrigerator in the house and loading it into the motorhome. About the time I came in from the last load I noticed something seemed different. And sure enough a light was on! 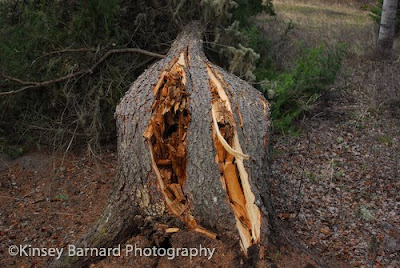 I really had no idea how bad the wind had really been until the next day when I went out to asses the damage. It was pretty amazing. 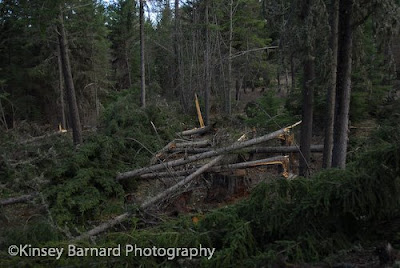 There were spots where every single tree had been knocked down, nothing left standing. I think what made this wind so devastating was that the wind came from out of the east. The prevailing wind at my location is out of the west. This meant that the trees were being blown back against years of surviving westerly winds. Some simply snapped. Others just rolled over. 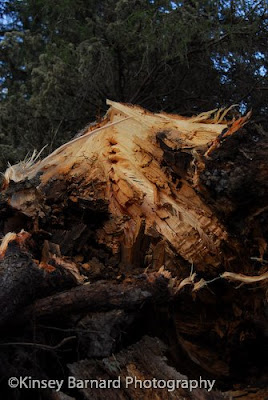 Regular readers know that I always look for the silver lining and here it is for this devastation. Almost every tree I lost was a spruce (I reckon I lost 40+ trees altogether). I don't even like spruce. They are shallow rooted, bushy things and the wood isn't even very good for firewood. Most would have come down eventually as part of my forest management plan sooner or later. Maybe Mother Nature doesn't like them either? Maybe I wasn't moving fast enough for her? I lost two fir and no larch. 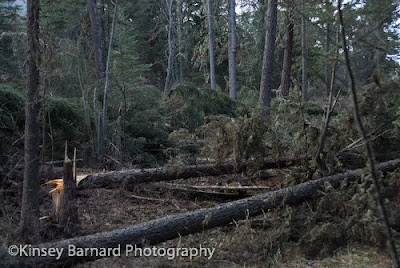 The big thing is the big mess. I'll be cleaning this one up for a very long time. Others in my area fared far worse than I. I'm grateful no one was hurt and we will all be back to normal in no time. Just seems like Mother Nature is not in a very good mood lately.

I have a ton of photos and tales to share that I still haven't gotten around to so those will be coming up.

PS: I am frequently told about people having trouble signing up for e-mail notification. I maintain my own notification list to be sure people who want it get notified. If you would like to be on that list please send your e-mail address to kotybear2002@msn.com
Posted by Walker at 9:11 AM