What's Wrong With This Picture?

They say a picture is worth a thousand words. I came across this table this morning and could not help but pass it along.

It is a list of Romney and Paul contributors. If you don't like Paul just look at Romneys contributors. Any of the contributor names look familiar? The man is clearly bought and paid for as are the majority of professional politicians.

Why is it that the American people are such suckers for good looks and slick talk? Romney fills the bill. They say insanity is doing the same thing over and over again whilst expecting different results. I think American voters have gone completely insane.

Poor old Ron Paul. He doesn't stand a chance. He is a tiny curmudgeonly man who is anti-abortion. Personally, I'm pro choice. I don't think abortion should even be a political issue. Rather it should be a matter of individual conscience not government regulation. I would still vote for Paul over Romney because he is at least a man who sticks with his values as opposed to saying what is politically expedient, unlike most of the rest of the crowd. Although, he must be making some kind of impact or he would not be getting a total media blackout.

If anyone still thinks we have a two party system you need to wake up. Democrat and Republican politicians are simply flip sides of the same coin. The majority of politicians are nothing more than self serving parasites who will promise you the moon and deliver you to a continually lower standard of living, just as they are currently doing whilst they get rich from your struggle and toil.

Going after Wall Street isn't the answer. You need to go after the people that gave them the power to do what they do. That would be our friends in Washington. Wall Street is just a symptom. If you want to get well you have to cure the desease.

Again, what's wrong with this picture? 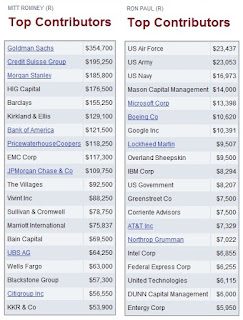 As long as we keep electing snake oil salesmen we are going to have to keep drinking the snake oil.

"Encounters with good people are not to be taken for granted. I consider myself lucky to know them even if only for a little while."  Kinsey Barnard October 20, 2011


©Kinsey Barnard
Posted by Walker at 8:23 AM

You left out the text from the source of this graph: "This table lists the top donors to this candidate in the 2012 election cycle. The organizations themselves did not donate, rather the money came from the organization's PAC, its individual members or employees or owners, and those individuals' immediate families."

Thanks for providing the link Terry.