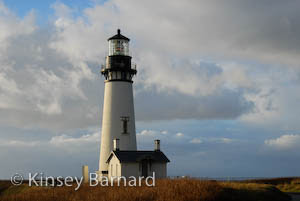 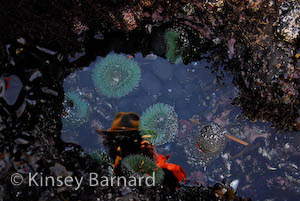 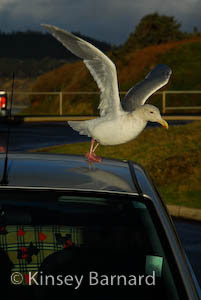 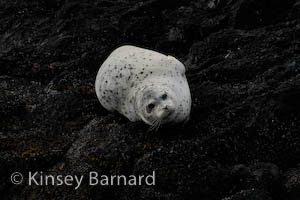 Well, yesterday was simply the pits! It rained the whole gol darned day. I mean it did not stop. Around noon even mom couldn't take it anymore so we piled in Shadow and headed north on 101. But, it was hopeless. After about an hour we headed back to Clementine and spent the rest of the day RV bound.

This morning there was a break in the clouds and we were all excited. Our first idea was to head south on 101 and ended up at South Beach, which is just a few miles past the Yaquina Bay Bridge. This is a great place for walking. When we started out everything was coming up sunshine not so long after we were pelted by hail and soaked through to the bone. So, soaked were we, we had to head back to Clementine and a change of clothes for mom.

After mom got a new set of clothes and I got a toweling we headed north on 101. We ended going to Yaquina Head which turned out to be a great place. There is the Yaquina Head Lighthouse, and way cool tide pools. Mom took a picture of herself in one with green anemone. She's a card. We also saw a bunch of Harbor Seals resting in the rocks. Then there was Jonathan Livingston Seagull parked on Shadow's head!

I had the best time poking around in the tide pools. I mean these are great ones. Just chock full of good sea stuff. El nose-o was in overdrive yet gain. If you are ever by this way, that would be around Newport, do not miss this stop! It is super deluxe!

We are now tucked away inside Clementine for the night and it's raining and blowing again. Clemmie is just rocking. But, this was another great day!
Posted by Walker at 6:46 PM