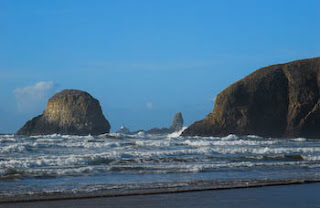 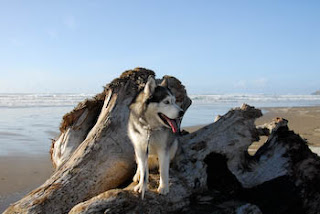 Yesterday there was one heck of a storm that blew through Portland. We braved the elements and went to Sauvie Island. There is a wildlife refuge there but it was closed, except to hunters. We wandered the roads but the good stuff was in the closed area. I can only imagine what a great time I would have hiking in this place. I really hope mom comes back sometime when it's open. It rained and the wind blew a gale the whole time. But, apparently, it was nothing compared to what was going on over on the coast where they were getting gusts up to 100 mph.

Bright and early this morning we hit the road for the coast. Mom nearly had a nervous breakdown trying to navigate the route to Hwy 26. Mom says the interchanges around Portland are the most confusing she has ever seen. We took a few wrong turns but finally made it to 26.

The drive over to the coast is very pretty. Once we got here we found that lotsa stuff is closed because of the storm. Ebola Park for one. It's supposed to be an awesome place for views. Mom took me down to the beach for a run. Golly, it was fabulous. I just went crazy running every whicha way. I really like the beach!!! You can see from the photo that the waves were still pretty heavy. After my frolic we drove up the coast towards Astoria. Every place mom tried for a hike was closed because of the storm and fallen trees. Well, maybe we will have better luck tomorrow!

Until next time ...
LAKOTA SUNRISE